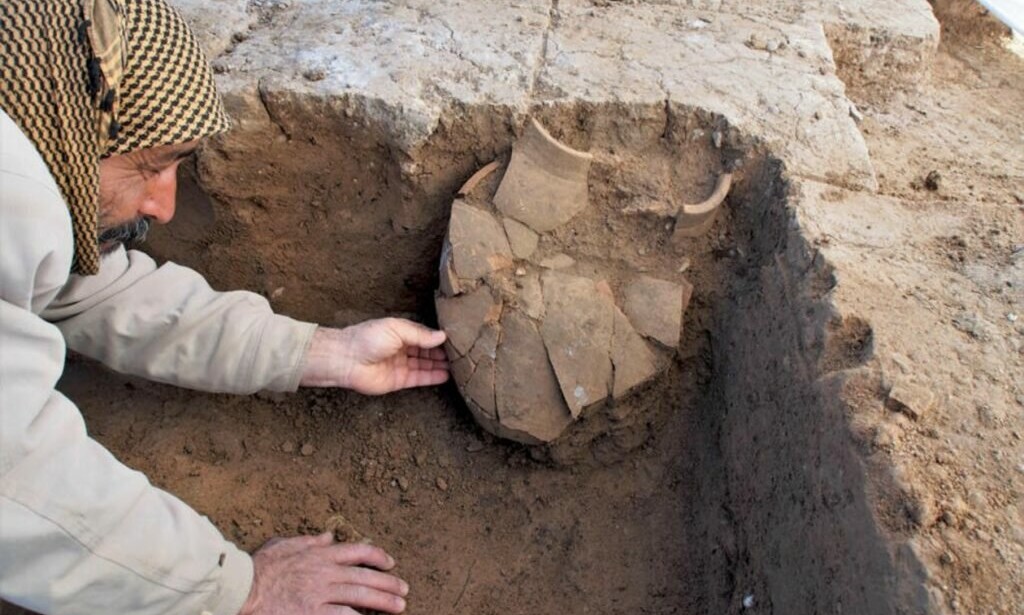 An ancient city surfaced on the Tigris River. And then it sank again

The 3,400-year-old archaeological monument has gone under water in the Mosul Reservoir for the second time in the last three years.

A team of German and Kurdish archaeologists discovered a town that they dated at 3,400 years old and thought to belong to the state of Mitanni. However, 'discovered' is not the right word: the fact is that it had already been found and then lost in 2019.

The Mosul Reservoir is located on the Tigris River, upstream from the city of Mosul in northern Iraq. And this reservoir is a source of constant headaches for representatives of various organisations: The UN, the US Army (in the past) and even archaeologists.

The dam of Iraq's largest reservoir is built on unstable ground: the earthen bank of the Tigris is above gypsum bedrock. And when you add to this the difficult politico-military situation that has developed since Saddam Hussein's death in northern Iraq, the concerns of international organisations are easy to understand.

In addition to the poor condition of the dam itself, there is the problem of improper water intake. Earlier this year, for example, the country's severe drought caused the reservoir's water level to drop seriously - not only was the Tigris not as full as usual, but the water was also actively being diverted for irrigation.

As a result, a city with a palace and several large buildings has appeared out of the water. Scientists suppose that it is Zahikou, one of the centres of Mitanni empire, which is mentioned in ancient sources, but, unfortunately, without specifying the location.

The unforeseen "surfacing" has left archaeologists with the need to excavate and document at least part of this large and important city as quickly as possible before it goes under water again. A rescue team was assembled within days and the excavation work was carried out at an extreme speed for archaeologists, as it was not clear when the water level in the reservoir would rise again.

Within a short period, the researchers had managed to map the city for the most part. In addition to the palace, which was documented during the previous "surfacing", several other major buildings were discovered: a massive fortification with a wall and towers, a monumental multi-storey warehouse building and an industrial complex. The extensive urban complex dates back to the time of the Mittani Empire (17th and 13th centuries BC) which controlled large parts of northern Mesopotamia and Syria.

In what archaeologists have called a warehouse, they found a variety of goods brought from all over the region and from Egypt. The city may well have been at the crossroads of trade routes - and it is highly likely that there was a crossing over the Tigris.

The fact is that the presence of such a full-flowing river was a serious obstacle for travellers of all sorts, from warriors to traders. For example, Assyria went from being a city-state to a powerful (and the first in history) empire because of what scholars believe was its control of the Tigris crossings.

The archaeologists were surprised to see how well the walls have survived, sometimes up to several metres high. And this despite the fact that they are made of sun-dried mud bricks and have been under water for over 40 years. The good state of preservation can be explained by the fact that the city was destroyed by an earthquake around 1350 BC, during which the collapsed upper parts of the walls buried the buildings.

Of particular interest is the discovery of five ceramic vessels containing over a hundred cuneiform tablets. They have been tentatively dated to the Middle Assyrian period (fourteenth to eleventh centuries), that is, almost immediately after the earthquake that destroyed the city.

This was the time of Mitanni's decline and Assyrian ascendancy. It should be noted that in its time, the Hurrians from Mitanni seriously displaced Assyrians in Mesopotamia. For example, Nineveh (40 kilometres from the reservoir, the territory of modern Mosul), the future brilliant capital of Assyria, in XV-XIV centuries BC was under the dominion of Mitanni. It was not until 1365 BC that the Assyrian king Ashur Uballit I recaptured it.

Researchers hope that the deciphering of the tablets will provide important information about the end of the Mitanni period and the beginning of Assyrian rule in the region.

To prevent the important site from being further destroyed by rising waters, the excavated buildings have been completely covered with a tightly fitting plastic sheet and covered with gravel. This is how they want to protect the adobe walls and any other finds still hidden in the ruins during the flood. Today the town is once again completely flooded.