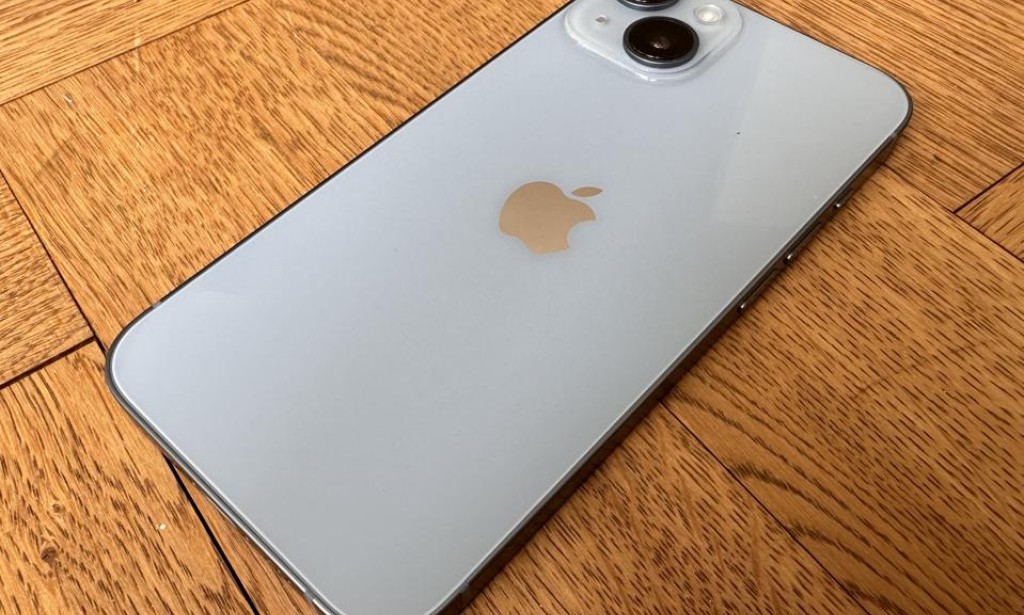 The Apple iPhone 14 is the most affordable current iPhone available, with a $200 savings over the iPhone 14 Pro. If you don't want to spend the extra money on an iPhone Pro and don't need the three cameras or always-on display, this is the first iPhone to consider. And it is a worthy contender, despite the fact that its external design is largely the same. 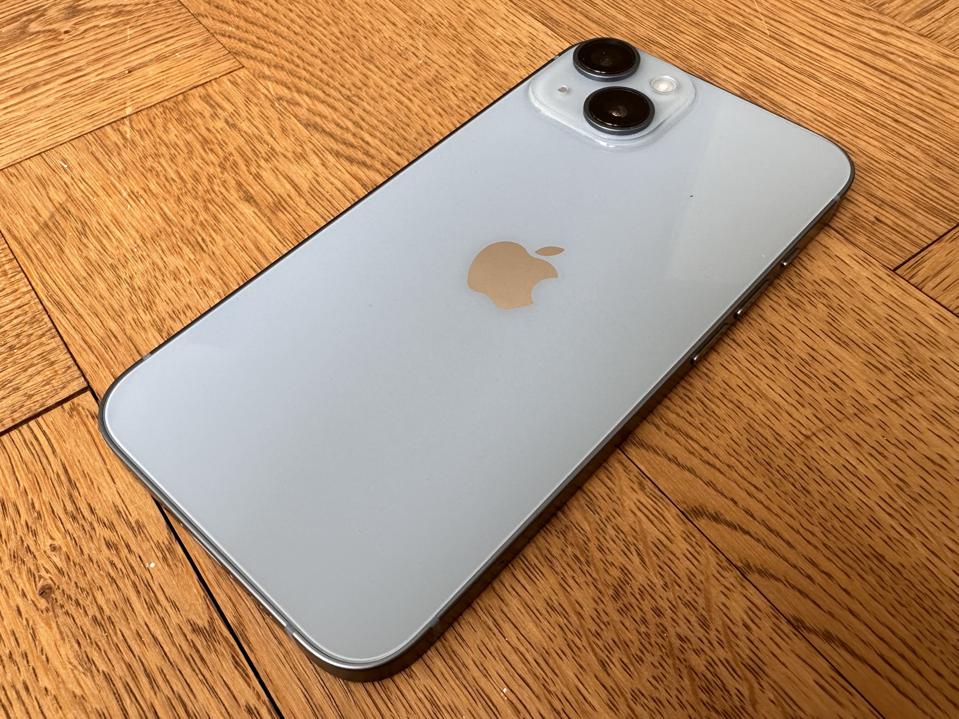 The Apple iPhone 14 in blue.

The iPhone 14 starts at $799 and has the same 6.1-inch display as the iPhone 14 Pro. The processor in the iPhone 14 is a lateral shift from last year's iPhone 13 Pro. The phone also gets a new main camera and a noticeably improved front-facing camera.

The iPhone 14 Plus costs $899, $100 more than the standard 14, and features a larger 6.7-inch display, the same as the $1,099 iPhone Pro Max. Aside from its larger size, larger battery, and higher price, the Plus is identical to the regular iPhone in terms of features and design (return here for more information on the Plus after it becomes available on October 7).

A handful of new features are included in all of this year's iPhones, including improved computational photography, the ability to detect if you've been in a car accident, improved video stabilization, and even the ability to send emergency messages via satellite. Everything you need to know about the iPhone 14 is right here. Continue reading to find out whether it's worth the relatively large investment.

Technical Specifications for the Apple iPhone 14

IT IS BEST FOR

The iPhone 14 may look familiar, and that's because it is. In almost every way, the Apple iPhone 14 resembles its predecessor.

The colors, the cut-out at the top of the display, and the cameras at the back are the most noticeable differences. The colors are changed subtly: a brighter PRODUCT(RED), for example, joins Midnight, Starlight, and Purple. The fifth colour is a new Blue, which is much more pastel than last year's and thus far preferable. While the Dynamic Island was added to the iPhone 14 Pro series, the iPhone 14's notch was redesigned to be narrower with a deeper cut-out.

The back is glossy rather than matte, as on the Pro iPhones. The iPhone 14 has an aluminum frame and weighs 1.2 ounces less than the iPhone 14 Pro, which is noticeable when holding the phone in one hand. 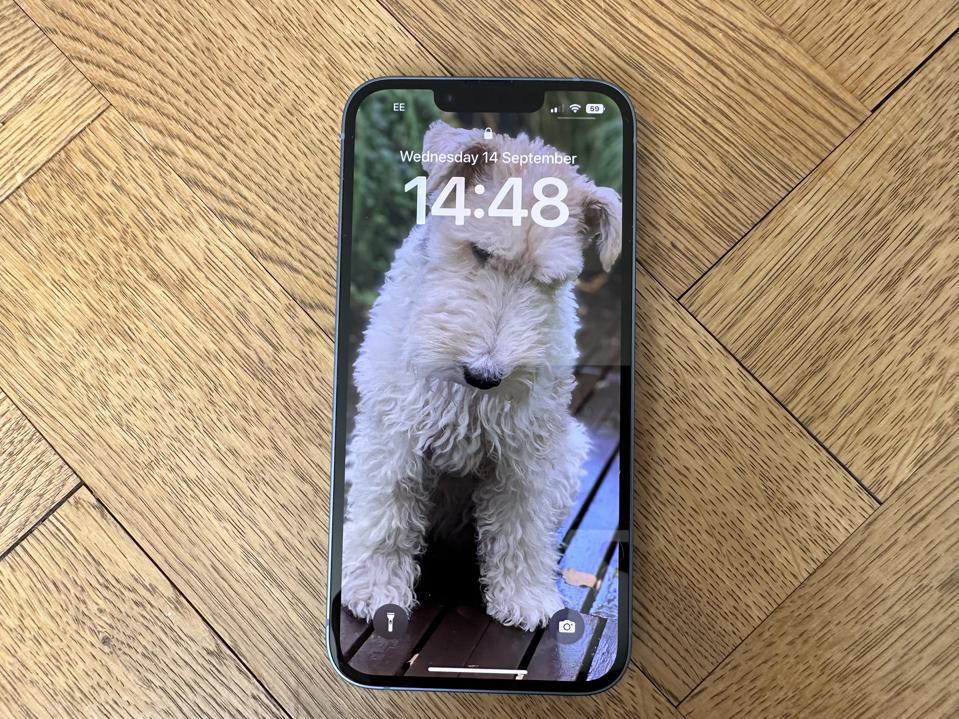 Apple iPhone 14 now has the display cut-out from...

This is the same cut-out style that was first seen on the iPhone 13 Pro to accommodate the front cameras. While it looks nothing like the iPhone 14 Pro's small capsule-like cut-out, it is an improvement over the iPhone 13's design.

The fundamental camera on the iPhone 14 is new, and has a greater focal point. Thus, and for balance, Apple has extended both of the back cameras, which stay in a slanting plan. Thus, you will require another case for the iPhone 14 — last year's cases won't fit.

U.S. models of the iPhone 14 trench SIM cards for utilizing sim. This implies the telephone no longer has a SIM card plate. The internals of the iPhone have not been overhauled at this point, as iPhones sold external the U.S. still have the SIM plate. In any case, this change sets Apple up for a future wherein sim is universal, and the inward parts can be rejiggered to exploit the emptied space.

The iphone sensors presently can recognize on the off chance that you've been in a fender bender and naturally make an impression on crisis administrations, including your exact area. The radio wires are additionally upgraded, to empower satellite availability beginning in November all through the U.S. also, Canada. The iPhone 14 can interface with a passing satellite for crisis messages on the off chance that you're off-matrix and have no wi-fi or cell association accessible. You should be outside and follow on-screen headings to know where to point your iPhone, and the Apple incorporates free assistance for a very long time. These are two new private wellbeing highlights that no other telephone brand has verged on offering, and is an extraordinary illustration of the manner in which Apple can use its tight mix among equipment and programming.

In the event that you're wanting a more broad plan change, you really want to sit tight for the bigger iPhone 14 Or more (beginning at $100 more) — or stump up the cash for the iPhone 14 Master.

The display is unaltered from the iPhone 13. In particular, it has a 6.1-inch OLED display with a 60Hz revive rate and 2,532 x 1,170 pixels, which compares to 460 pixels-per-inch. The display seemed something very similar to me being used, delivering splendid pictures at a greatest 800 nits brilliance (and 1,200 nits top utilizing HDR). It has an earthenware safeguard at the front to safeguard the glass and the display and telephone are impervious to water to 50 meters.

Apple's camera engineers are extraordinary, and they've placed another primary camera on this iPhone. Curiously, it's not quite the same as the additionally new fundamental camera on the Ace models.

The iPhone 14 adds a more extensive f/1.5 opening focal point and a bigger picture sensor with bigger pixels. In programming, Apple adds what it calls the Photonic motor, which slopes up Apple's computational photography capacities by moving the cycle prior into the work process than previously. This implies Profound Combination — Apple's expression for stacking various pictures and filtering through them to make a more extravagant eventual outcome — happens prior in the computational pipeline, before any pressure happens. The outcome is a superior picture just in light of the fact that Apple's beginning with better information. The Photonic motor is in all iPhone models. 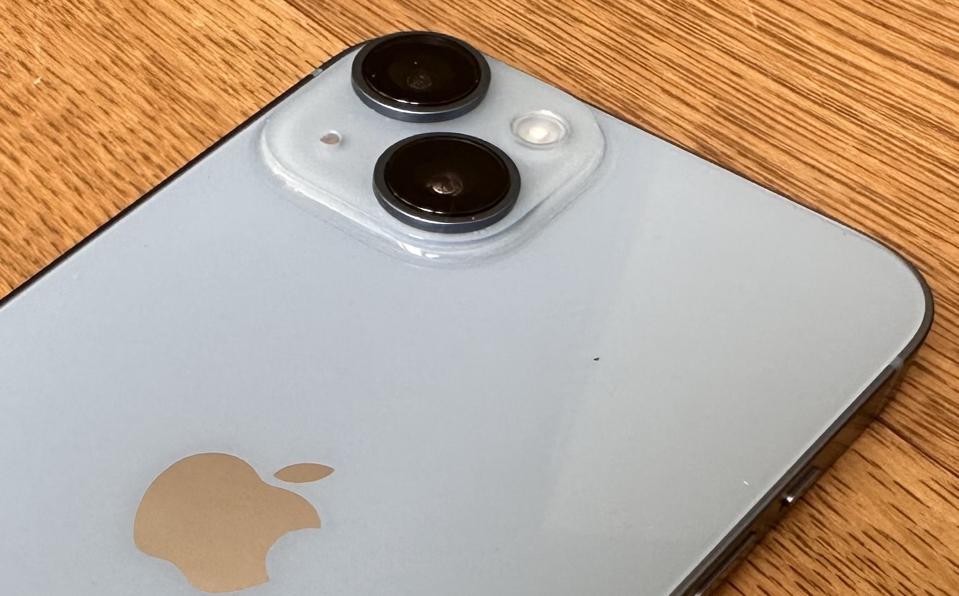 The bigger rear cameras on the iPhone 14.

Between the refreshed fundamental camera equipment and further developed programming, Apple says the iPhone 14's camera has 2.5x better execution in low light contrasted and the iPhone 13. Indeed, that is difficult to evaluate yet unquestionably the camera is generally excellent. In my tests, pictures were point by point, rich and sharp, even in lower light and precarious shooting conditions. Apple proceeds to sporadically make normal shots look jaw-droppingly great.

The super wide camera continues as before as in the past, however pictures benefits from the Photonic motor. The blaze on the iPhone 14 is upgraded to give 10% more splendid and more uniform lighting. The new forward looking camera ups the pixel count from 7 megapixels to 12 megapixels, aligning the front camera with the one on the iPhone 14 Expert. Also, unexpectedly, the front camera has a self-adjust, focal point rather than the conventional fixed center. Once more, the accentuation is on working on low-light execution, a point which became clear when I took a gander at a selfie picture on the iPhone 13 and 14 models next to each other at a similar splendor. I could see a clear expansion exhaustively and light taking care of.

Video's most up to date stunt is Apple's Activity Mode, with further developed optical picture adjustment to smooth video catch. Simply tap the symbol of a little individual running at the highest point of the video choice in Camera to empower this component. It works to some extent by trimming in to what the camera sees to give itself loads of room around the outlining to move around and offset all the movement.

Activity Mode is on the iPhone 14 Star, as well and I've tried it on both. The experience is indistinguishable, however clearly the end-product is better on the Ace on the grounds that the camera's sensor is better (a noteworthy 48 megapixels). Activity Mode conveys smooth and profoundly watchable video, enough so I can reconsider whether I actually need a different gimbal for picture adjustment. 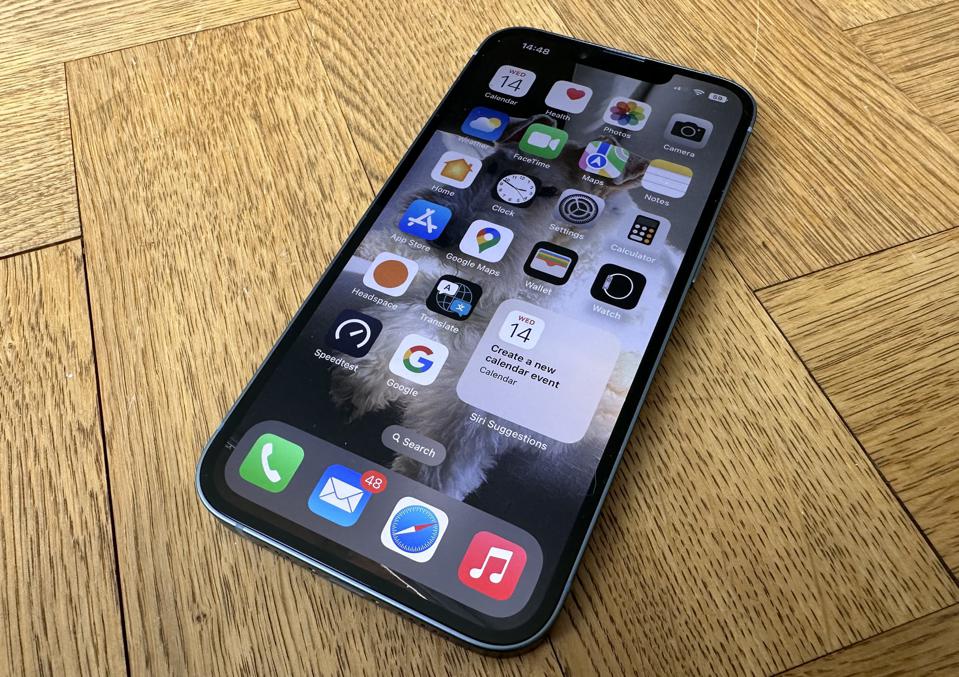 The Apple iPhone 14 uses the same processor as the...

Some have said this phone ought to be known as the iPhone 13s, harkening back to when Apple added a S to the model name in years the redesigns were less emotional. Indeed, it seems to be the iPhone 13, yet envision what is happening on the off chance that the iPhone 14 Master and iPhone 13s had been delivered simultaneously. Apple made the best choice in naming it like this, regardless of whether the new phone some of the time appears disappointing. The way things are, I tracked down this phone's presentation profoundly viable and quick. In the event that you weren't informed it was a year-old chip, it wouldn't cross your see any problems to inquire.

Battery duration you'd anticipate, enduring an entire day. Regardless of the new highlights, this iPhone's battery endures the length of the iPhone 13 which, you could recall, was much better compared to the iPhone 12.

It's actual this iPhone seems to be last year's model. It's actual the presentation stays unaltered, and the back camera's megapixel count is something very similar. Furthermore, it's actual it utilizes last year's (Genius) processor. 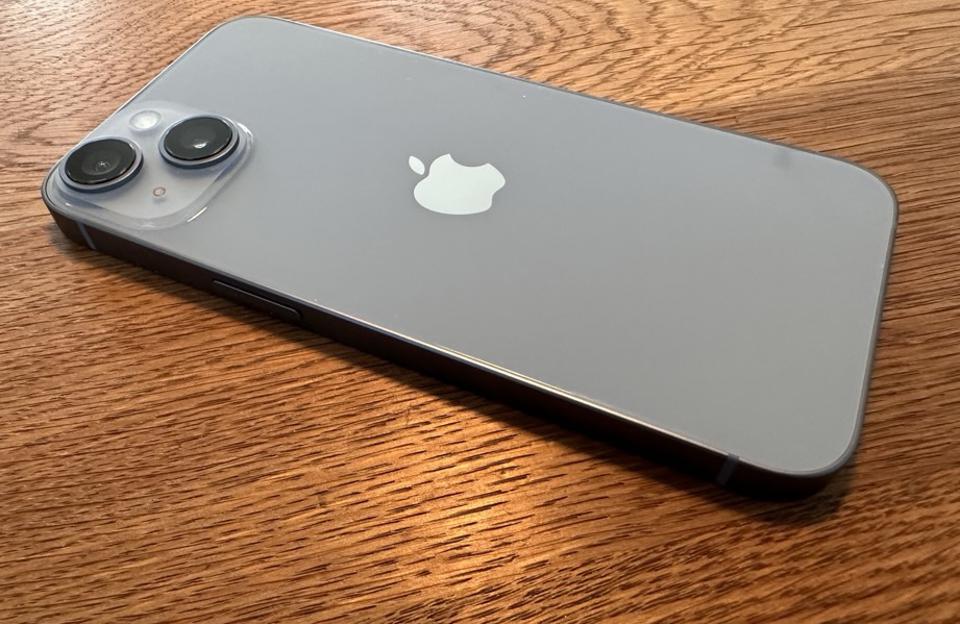 Apple iPhone 14 in its new shade of pastel blue...

In any case, the iPhone 14 has sufficient power from its processor to deal with worked on computational photography and video Activity Mode. The cameras really do well in low light, and produce nitty gritty stills and smooth video. Then there are the cool new wellbeing highlights: crash identification and crisis SOS messages.

In this way, indeed, while the iPhone 14 might seem to be last year's iPhone, it's everything except. The iPhone 14 is an incredible decision for any who value the more modest showcase and don't need the higher megapixels and consistently in plain view of the iPhone 14 Expert. Going with the 14 sets aside some cash, however it does as such by forfeiting those power highlights.

Apple iPhone 14: Would it be a good idea for you to Upgrade?