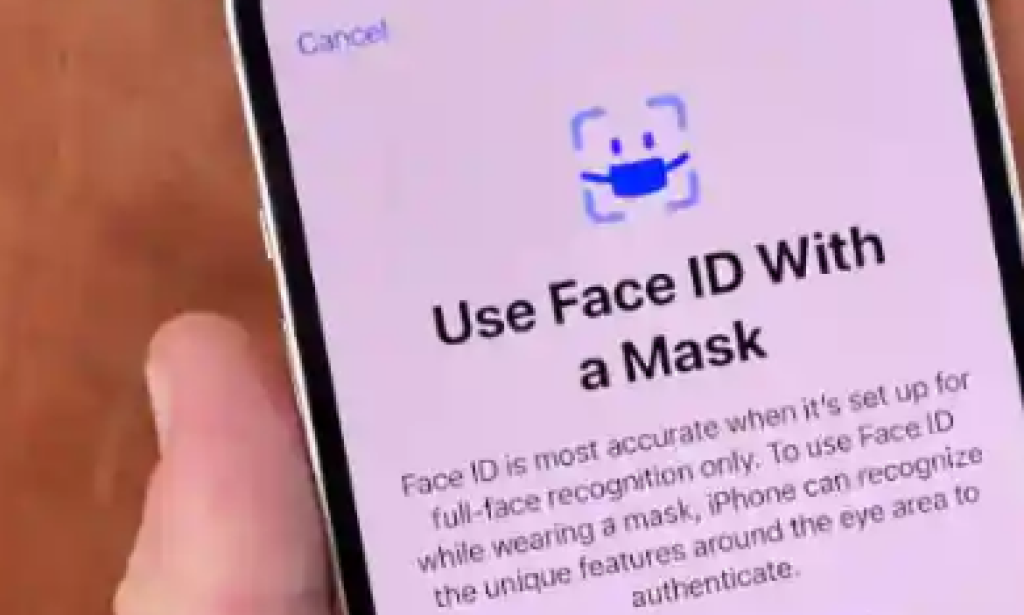 Apple recently released a software update that will allow iPhone users to unlock their devices even while wearing a face mask.

This update will allow iPhone users to unlock their device even while wearing a face mask.

The new update iOS 15.4 was released on Monday, in which many other features have also been given for the iPhone.

It was told that on updating the device, the user will get the option to use Face ID with a mask on the welcome screen.

Have you put on a mask?

You will still be able to unlock your iPhone, Apple brought this special feature

Face ID Unlocking With a Mask: iPhone users are soon going to get such a feature, with the help of which they will be able to unlock iPhone with Face ID without removing the mask.

Since the danger of corona is looming in the country and the world.

From then till today, people are protecting it by wearing masks.

In such a situation, those who use the iPhone are facing a lot of problems.

As they need to remove the mask to unlock their phone.

But Apple has also found a solution to this problem.

On the demand of users, Apple is soon going to bring a tremendous feature related to Face ID for its users.

Let us know how this feature will work and how it will work.

Actually, there was a demand for iPhone users for a long time, Apple brought special features related to Face ID for them.

A feature in which users' iPhone is unlocked with a mask.

Users will soon get such a feature from Apple.

Recently this feature has been seen in the beta version of iOS 15.4.

It was seen in this beta update that users are getting permission to unlock the phone without a mask.

The company will facilitate this feature on many apps apart from Apple Pay.

After this feature coming with iOS 15.4 beta version, users will be able to unlock their iPhone without taking off the mask.

Which will be quite easy and beneficial, because it is not safe to take off the mask again and again to unlock the phone.

At the same time, wearing a mask is very important to avoid Coronavirus.

In such a situation, this feature is going to prove to be very beneficial for the users.

iOS 15.4 beta to be rolled out globally

Let us tell you that Apple Watch and iPhone users can still unlock the phone without taking off the mask.

But for this he uses his Apple Watch.

Because your Apple Watch is paired with your phone, you can unlock the phone without removing the mask.

But according to the report, now the company is preparing to roll out iOS 15.4 beta update globally.

After which iPhone users all over the world will be able to unlock the phone without taking off the face mask.

Hi , I am writer author poet. Myself:;;;;;; MRS. BUSHRA JAMAL D/O- MD. JAMALUDDIN EDUCATION--Graduation(English Hons). HIGH SCHOOL EDUCATION-- WITH SCIENCE Instagram I'd-writer_bushra26 This is Bushra Jamal,she was born in the district of Patna she has studied in English school, she has done intermediate in science and she has done her graduation (IGNOU) in English honors. She is from simple middle class family with younger brother and sister. She was married in 2016. Since 2017 she wrote English poems and short stories also. She is the mother of a child. In 2021, she published, her first book -6year girl abused,which is written in english. She worked as a co - author in many book. 1--अन्नदाता( किसान व उनकी परेशानी)in which she has written very good poetry is in hindi. 2-सपनों की सीरी- (तैयारी जीत की) In this book also he has given a very beautiful poem is in hindi 3-पिता-(एक आसमान)In this book, he has given a poem which is in English. 4)पिता- in this book she wrote a beautiful poem for her father. 5)शब्दों का जादू - she wrote a poem on gullak. She appears a lot of Shayari,Poem, Short Stories. She Writes in both languages ​​English and Hindi. They like to write, it has become their passion in writing. "Pen for me is like weapon, I can describe my emotions, which modify written