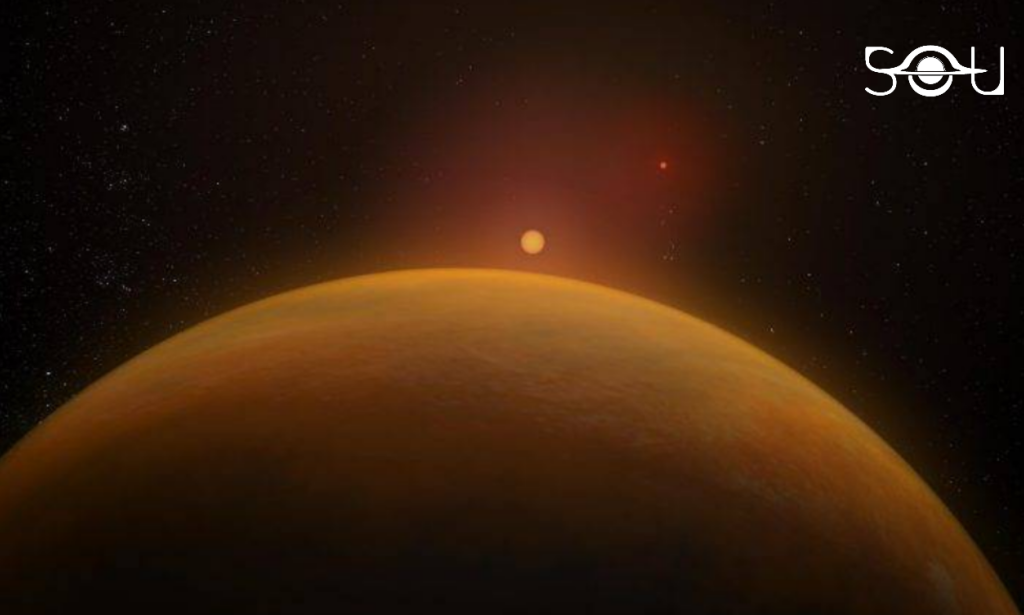 Their work produced the first-ever determination of the complete, 3-dimensional structure of the orbits of a binary pair of stars and a planet orbiting one of them. This achievement can provide valuable new insights into the process of planet formation, the astronomers said. This breakthrough was made using the National Science Foundation’s Very Long Baseline Array (VLBA).

which was used to produce this discovery. However, the feat of determining the 3-D architecture of a binary-star system that includes a planet “cannot be achieved with other exoplanet discovery methods,” said Salvador Curiel, of the National Autonomous University of Mexico (UNAM).

“Since most stars are in binary or multiple systems, being able to understand systems such as this one will help us understand planet formation in general,” Curiel said.

The two stars, which together are called GJ 896AB, are about 20 light-years from Earth. That makes them close neighbors of ours by astronomical standards. They are red dwarf stars, the most common type of star in our Milky Way galaxy. The larger one, around which the planet orbits, has about 44 percent of the mass of our Sun, while the smaller one is about 17 percent as massive as the Sun. They are separated by about the distance of Neptune from the Sun, and orbit each other once every 229 years.

For their study of GJ 896AB, the astronomers combined data from optical observations of the system made between 1941 and 2017 with data from VLBA observations between 2006 and 2011. They also made new VLBA observations in 2020. The continent-wide VLBA’s supersharp resolution, with its fantastic ability to see fine detail, produced extremely precise measurements of the stars’ positions over time. An extensive analysis of the data performed by the astronomers revealed the stars’ orbital motions as well as their common motion through space.

The existence of the planet was revealed by a detailed tracing of the larger star’s motion that showed a slight wobble. The planet’s gravitational effect on the star causes the wobble. The star and planet orbit a location between them called the barycenter, which represents their common center of mass. When that location is sufficiently far from the star, the star’s motion around it can be detectable.

According to calculations by the astronomers, the planet has about twice the mass of Jupiter and orbits the star every 284 days. Its distance from the star is slightly less than Venus’ distance from the Sun. The planet’s orbit is inclined approximately 148 degrees from the orbits of the two stars.

“This means that the planet moves around the main star in the opposite direction to that of the secondary star around the main star,” said Gisela Ortiz-León, of UNAM and the Max Planck Institute for Radioastronomy. “This is the first time that such dynamical structure has been observed in a planet associated with a compact binary system that presumably was formed in the same protoplanetary disk,” she added.

“Additional detailed studies of this and similar systems can help us gain important insights into how planets are formed in binary systems. There are alternate theories for the formation mechanism, and more data can possibly indicate which is most likely,” said Joel Sanchez-Bermudez, of UNAM. “In particular, current models indicate that such a large planet is very unlikely as a companion to such a small star, so maybe those models need to be adjusted,” he added.

The astrometric technique will be a valuable tool for characterizing more planetary systems, the astronomers said. “We can do much more work like this with the planned Next Generation VLA (ngVLA),” said Amy Mioduszewski, of the National Radio Astronomy Observatory. “With it, we may be able to find planets as small as the Earth.”