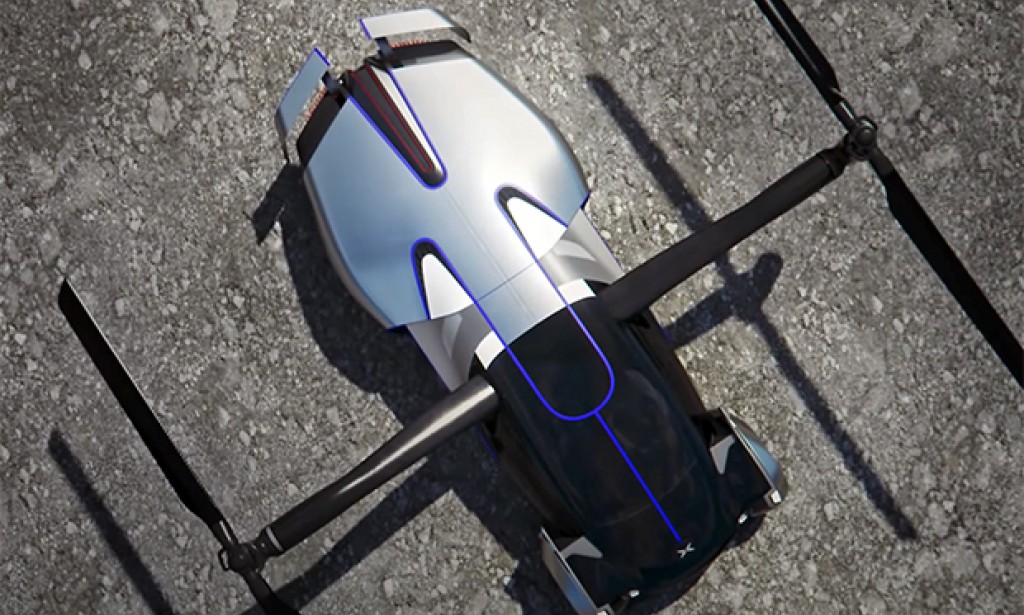 At the end of October, XPeng, dubbed "China's Tesla," described the design of the car of the future. The flying machine is not yet in the form of a prototype, but the company intends to start production in 2024. The model was named HT Aero - after the name of the XPeng subsidiary working on it. The car has a hybrid device, that is, it will move both on public roads and by air. The machine is designed for short flights at low altitude. Cars from the future are kept on the ground by laws that will have to be adapted to a new type of transport. The automaker was able to achieve a more or less adequate price for a manned vehicle - a hybrid car will cost as a business class car. HT Aero is estimated at around one million yuan, or about 11 million rubles.

The described HT Aero will be constructed with lightweight materials that will save on fuel. According to representatives of the concern, the model will be about half the weight of the serial Xpeng P7 electric car, that is, it will weigh up to one ton. The car will be able to accelerate to 130 kilometers per hour - a very low speed compared to civil liners. On a single charge, the device can fly for about 30 minutes.
The future car will receive a sports car form factor with two doors and seats for the driver and passenger. The cabin will have a steering wheel - similar to that installed in new Tesla cars, however, with its help it will be possible to control the machine only on the ground. For piloting in the air, under the driver's right hand there is a handle resembling a side stick in military fighters or civilian aircraft Airbus A320 or Sukhoi Superjet 100. For the car's flight, a pair of turboprop engines will be hidden in its body, which are able to move to the sides and spin in the opposite direction, creating necessary lifting force. The pilot in the seat will be able to control altitude, speed, pitch and other parameters.Despite the fact that the car is not completely autonomous, a special system will analyze the position in space and monitor takeoff and landing. In case of bad weather conditions or obstacles in the air, artificial intelligence will simply block the possibility of takeoff.

Humanity is now as close as ever to making flying cars, according to a public discussion between the aviation industry at the MIT platform in 2019. A huge role in this was played by the development of lightweight composite materials that can be used for flying vehicles, improved communication and guidance systems and software for autonomous control. Scientists and futurists believe that first of all, air taxi will appear in the world, which will carry passengers for a moderate fee. The cost of a flight for several kilometers will cost $ 40-50. Flying vehicles - specifically air taxis, not helicopters - will appear in the next ten years.

Experts see safety as one of the problems of flying machines. First, the vehicles must have navigation systems and warnings of approach to the ground and other flying objects. Secondly, it is necessary to develop secure software that will be difficult to remotely hack and, for example, send a car into the ground or a building.

Flying cars are designed by companies around the world

In any fictional work with the cities of the future, cars, as a rule, are transported from ordinary roads into the air. Or cars have a hybrid device: that is, they have wheels for movement on the ground and a certain motor and wings for movement at low altitude.

There are a number of companies and startups around the world that are claiming work on flying machines. In particular, giants of the aviation industry such as Boeing and Airbus are creating their prototypes of air taxi. As a rule, developers describe the flying car of the future as a form of transport that has dimensions comparable to a conventional car, means for lifting into the air and a piloting system.

Flying cars have not only advantages but also disadvantages

The introduction of flying cars is actually seen as the solution to many problems on earth. Firstly, for this type of transport it is not necessary to build and maintain an extensive system of highways. Secondly, the existing roads are freed up for public and slow-moving vehicles, as well as for pedestrians. Third, flying cars, in theory, use less fuel and are less polluting. This is due to the faster travel time between points A and B in comparison with ground vehicles, and the absence of traffic jams in the air, which reduces the idle time of the engine.

Theorists describing the transport of the future also list the disadvantages of this method of transportation. Most likely, piloting an aircraft will be more difficult than driving a conventional car, which is fraught with an increase in the number of accidents in the air. Also, such a car will be a more expensive and noisy mode of transport. Do not forget about the laws governing civil flights, which will need to be finalized with the introduction of new types of flight transport. The rules will describe which category of drivers can sit at the wheel of a car, where they can land, which routes to take and how far to stay from traditional vehicles.