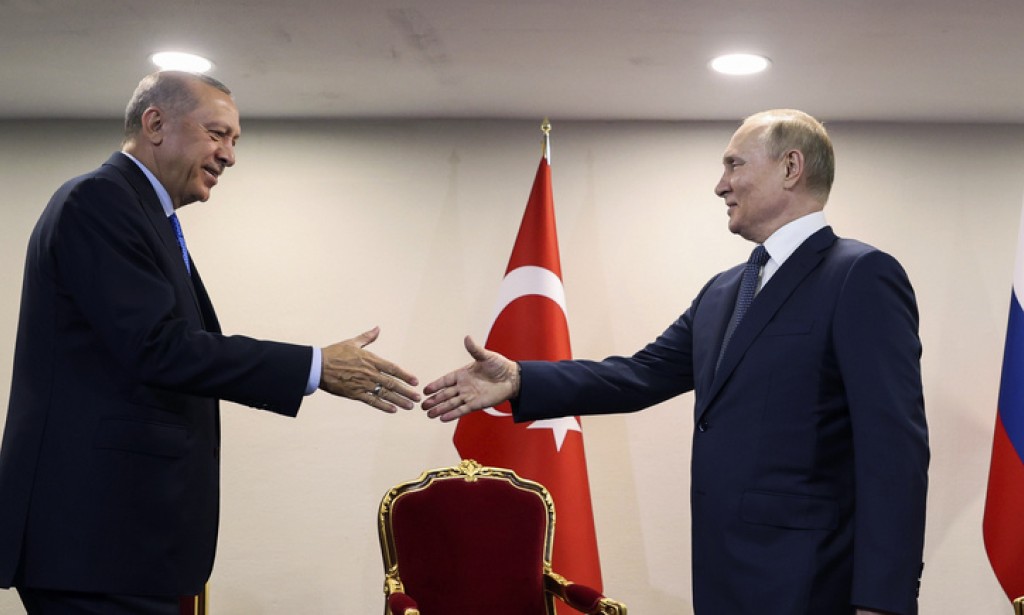 Turkey is undermining the Western sanctions regime against Russia, Der Spiegel reported. This August, Ankara increased its shipments to Russia by 87 percent. And this is not only local products, but also European goods, for which Turkish ports have become a kind of transit point on the way to Russia. In the West, such behavior of President Recep Tayyip Erdogan certainly causes discontent, but in reality he simply cannot afford an energy war with Moscow, the German edition explains.

For many people, the fighting in Ukraine has become a tragedy, but for some it has also become an opportunity to make a profitable deal, Der Spiegel said. For example, for Turkey, and in particular the chairman of the board of the Istanbul association of exporters of ferrous and non-ferrous metals (IDDMIB) Çetin Teçdelioğlu. What Russia can no longer buy from Germany, Italy and France because of Western sanctions, "it is now buying from us," he said. In addition, many European companies are using Turkey as a "warehouse and bridge" to further sell their goods in Russia. The current situation provides Ankara with a unique "historical opportunity," Teçdelioğlu stressed.

All warehouses in the port city of Mersin are now full, the German edition continues. Goods arrive there from all over the world, and then go to Russia. Due to sanctions, many large shipping companies no longer serve Russian ports, and this task has been taken over by Turkish companies. Also, the movement of freight transport through the Caucasus has increased significantly.

The development of Turkish-Russian economic relations is evidenced by statistics, Der Spiegel notes. From February to July Russian imports to Turkey fell by 38%, but over the same period Ankara shipped 42% more goods and intermediate products to Russia. In August, exports even increased by as much as 87% over last year's figures. A similar picture emerges in the area of raw material imports. Oil shipments from Russia to Turkey have doubled in eight months. That is, while the EU is trying diligently to achieve step-by-step independence from Russian oil and limit Moscow's revenues from the sale of raw materials, Ankara has been particularly active in this area," the newspaper emphasizes. - Looking at the Turkish statistics raises the question: "Isn't there the biggest hole in the sanctions regime right under the noses of the Europeans, in the country of NATO member?

Brussels and Washington are closely watching what is happening. However, the situation is complicated. Turkey is indeed a member of the Western military alliance, but it has not joined the anti-Russian sanctions. Politically, Ankara has taken a position opposite to that of Moscow. Turkish President Recep Tayyip Erdogan condemned the Kremlin's actions in Ukraine and demanded the return of all occupied territories. But against the background of such statements it looks strange that he simultaneously tries to negotiate with the Russian president on the construction of a nuclear power plant in his country, as well as to get a discount on gas. Moreover, Ankara has agreed to pay 25% of its purchases of the blue fuel in rubles. "Erdoğan's decision-making is guided by a simple compass: he does what he thinks is best for Turkey," Der Spiegel explains.

A number of factors contribute to the increase in trade between the countries. First of all, the Turkish lira has depreciated since the beginning of the year, making local goods much cheaper for foreign buyers, including in Russia. In addition Western companies began to deliver goods to Russia through Turkey, abandoning shipments via the Baltic Sea and overland routes. This is evidenced, in particular, by the increase in exports from EU member states to Turkey, such as Italy (by 70% after the imposition of sanctions) or Poland (by 94%). German shipments to Turkey also increased by 13%.

However, experts believe that this does not necessarily indicate an attempt to circumvent the sanctions. It is possible that this shift is related to the reorganization of transport routes. Perhaps it has good logistical reasons. After all, the Western penalties only affected 28% of goods shipped from the EU to Russia. Since the beginning of the hostilities in Ukraine, European exports have indeed almost halved. But now the situation has stabilized somewhat, and companies that were not directly affected by the sanctions are creating new supply chains to Russia.

Brussels has so far treated Turkey's "double game" with a certain calmness, the newspaper continues. Ankara's deliveries undermine the Western ban on the sale of technology to Russia, but the volume of exports is so insignificant that it has no tangible impact on the sanctions regime. In addition, according to European officials, from a diplomatic point of view, Erdoğan has played a rather positive role in the Ukrainian conflict. He has supplied combat drones to Ukraine and closed the Bosporus Strait to Russian warships.

The fact that Erdoğan is trying to benefit from Western sanctions is explained in the EU mainly by Turkey's economic problems. After all, hyperinflation is raging in the country. The middle class is getting poorer, and the currency is depreciating. So Ankara simply cannot afford the energy war that Europe is currently waging against Russia. But the West is not going to stand idly by. At the end of August, Turkish industrial associations and the Ministry of Finance received a letter from Washington signed by the U.S. Deputy Treasury Secretary Wally Adeyemo. The letter warned Turkish companies that they could become targets of secondary sanctions if they continue to violate the existing penalties. Ankara called the paper "meaningless" but, nevertheless, for the exporters in the country the Western market is more important than the Russian one, so the companies take the risk of losing it seriously.