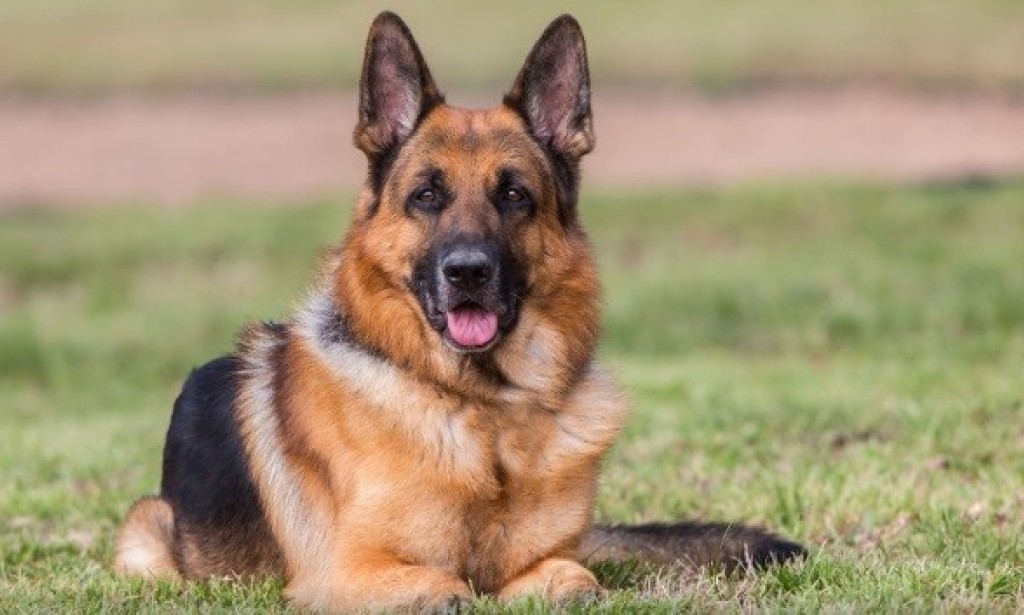 Characteristics of the German Shepherd in the table

Origin of the breed 18th century

The pet has a brown and black color and is not considered a large or small dog. The sturdy build of the animal is combined with strong muscles and thinness. The standard height of male dogs is 62-65 cm, while females are 52-60 cm.

The head of the German Shepherd has an elongated wedge-shaped form, extended near the ears. The length of the skull and the muzzle are equal. The dog has a well-developed jaw and a powerful scissor bite. A characteristic feature of Germans is a black nose. The eyes of sheepdogs are almond-shaped, dark in color and slightly slanted.

The animals possess standing triangular-shaped ears, with the tips of the ears pointed and pointing upward. During some movements or sleep, they may be laid back.

The neck of the German has no suspensions. It is muscular and strong, as is the back.

All body proportions, torso volume and paw placement affect the working characteristics of the breed. With the correct physique (no obesity or excessive thinness), all movements of the sheepdog are relaxed and dexterous.

Wool of representatives of this breed is quite stiff and short. It fits well to the skin. Germans have an undercoat, and the longest hair is in the area of the neck.

A pet's coat color can only be one of the following options:

2Black color with spots of brown (dark/light) or grayish color.

3A grayish coloration that includes a black mask and coat.

The undercoat in animals has a grayish tint.

Character of the animal

As far as character is concerned, the German Shepherd is considered a very loyal friend with a stable psyche. If the German is purebred, there will be no negative character traits in it. This is what makes this breed valuable and unique. The vocation and purpose of life of such a sheepdog is faithful service to its owner. The dog does not like to be idle and sleep for a long time. German dog delights every opportunity to be active and useful to its owner. Therefore, the pet is always happy to keep its owners company both in service and in exploration.

It is a wrong stereotype to think that German Shepherds are mean and unkind to other animals and people. Aggression occurs in German Shepherds when they feel threatened. Dogs themselves are capable of analyzing and perceiving different situations. That is, if a pet feels that someone wants to physically hurt you, he will not wait for a command to act, but will start warningly barking at the enemy. And in a situation of extreme danger it will pounce on him.

Another feature of the German is the absence of fear. This is a very brave dog that never thinks about unequal power. If necessary - it will pounce on the enemy and will "fight" to the death to protect the beloved owner.

Also, the dog considers only one person to be the master. He is the one who will be in charge of raising the sheepdog. This does not mean that she is indifferent to other family members. She is friendly and attached to all "roommates". In particular, she adores children, with whom she can play and prank for a long time.

They do not sit idly by

Germans do not like loneliness and long absence of their owner. Otherwise, the pet develops depression. The right way to distract the dog from his melancholy thoughts is to occupy him with a useful activity during the absence of the owner. For example, you should entrust him to guard the territory. The dog is very industrious and noble. If he received an order from the owner, no one will be able to "bribe" him and make him refuse to perform his duty.

The German Shepherd is a good actor. An intelligent dog knows how to behave properly in public, clearly performs the given commands and tasks, avoiding missteps.

A striking representative of canine acting was the German Rin Tin Tin, who has played 26 roles in movies. In the movies, the pet was a wolf, and a fighting dog, and a loyal friend. For his "services" the dog was awarded a star on the Walk of Fame in Hollywood.

Care of the German Shepherd

Although the German is a very self-sufficient dog breed, it still needs care. Here we must remember that the best qualities of the animal are shown on the background of excellent health of the pet. When breeding a German Shepherd, you should not leave it to itself.

The German Shepherd should be provided with a proper diet. It should be dominated by protein. That means that the basis of the diet must be meat. It is not recommended to give the pet potatoes, since they are poorly digested by the canine body.

At least once every few weeks you should give your dog a little checkup. Even if the pet is active and lively, precautions don't hurt. Otherwise you might not detect serious illnesses in time.

In addition to the standard set of diseases that can affect the dogs, the Germans are characterized by hereditary diseases that may be associated with the musculoskeletal function of the body.

Another weakness of the animal is the eyes. They can have corneal dystrophy, lens dislocation, cataracts, dermoid, pannus and other eye diseases.

A German Shepherd needs regular vaccinations and competent treatment against parasites (both internal and external). Because sheepdogs after contact with other animals can get scabies or the formation of herpes.

You should especially pay attention to the condition of the dog's coat and periodically examine it. If the dog becomes allergic to a particular product, a rash or peeling may form on the skin. Then you should immediately cancel the use of harmful food. The main thing is not to confuse allergic reactions of the body with dermatitis in dogs.

It is very important not only to inspect and treat the animal in time, but also to try to keep it clean. If the sheepdog lives outside in a private area, it is necessary to keep its enclosure in normal sanitary conditions. Water procedures for the animal should not be forgotten.

Do not feed the dog pasta and flour, because the benefits from them will not be at all, and extra calories will lead to obesity and the development of inertness in the dog. It is recommended to give the German dog porridge.

Portions are calculated based on the body weight of the animal. But in general, it is worth relying on the rule - the more nourishing and nutritious the food, the less it should be given to the dog. And vice versa.

The German is on the list of the smartest dogs on Earth. And although in various films these dogs appear as intelligent, perfectly trained animals, if you don't train them, there will be little result.

To get a dog with intelligence, it's not enough just to buy a German puppy. Owners will need to dedicate a great deal of time to the education of the dog, from his first days of life.

Teaching simple commands is easy. But if sheepdog owners have a desire to reproduce something more meaningful, you can take the dog to training courses with professional dog trainers.

Whatever the case, the German Shepherd is naturally intelligent and industrious. The desire to learn new things is always there. Therefore, to develop its abilities to perfection, you should regularly engage in its training. You can start with a small "bring the stick" and search for lost things by smell.

For example, a German named Julbars at one time received the medal "For Combat Merit. The sheepdog participated in many battles and clearing objects. Julbars managed to find about 500 mines and 150 shells.

As you can see, the German Shepherd is naturally intelligent and shrewd. It is restless, devoted to its master and ready to do anything for him. If you direct its energy in the right direction and train it from an early age, you can end up with a valuable helper, friend and rescuer in one person.