How coal effect the power sector in india

Nowadays, the Indian newspaper headline is "The power crisis in India or the electricity crisis in India”. The northern regions of India are experiencing power outages that last 6–8 hours in cities and up to 18 hours in villages. Industries in industrial states like Gujarat were ordered by the government to cut their power consumption in half. Around 400 passenger trains are forced to stop to move coal efficiently.

Why is this happening in India? What is the reason behind this power crisis?

Today we will discuss this question's answers. Before we get into the answer, it's essential to understand how India's power sector works. Thermal power plants in India generate 70% of the country's electricity. Thermal power plants operate by boiling water to vaporize it, which then passes through a turbine to generate electricity. As a result, boiling water plays a crucial role in this procedure. A variety of items are used in the boiling process. Among all of the materials, coal is the most commonly used. So, coal and India's electricity are intimately related. Around 82% of the coal used in thermal power plants is generated or mined in India. Only 18% comes from outside the country. India has self-sufficiency in coal.

However, we should be aware that other countries are gradually phasing out coal use because the use of coal is a significant contributor to global warming and climate change. Around the year 2050, there will be some discussions about eliminating coal use. Coal investment and reserves are currently on the decline.

Coal was once stored in thermal power plants earlier. However, because the price of coal is falling, stocking is no longer necessary because it is causing them losses. As a result, the thermal power plant implements a Just-in-Time procurement strategy. That is, when more coal is needed, buy more coal; when less coal is needed, buy less coal. However, the problem with this strategy occurred in the previous year, around September-October 2021, when industries were recovering from the COVID-19 pandemic, and electricity demand increased significantly. However, power plants did not have enough coal to meet the demand. As a result, power plants require more coal from coal production, but due to heavy rain in coal-producing states, coal mining has stopped, resulting in a power outage. The government's correct intervention does not result in a large-scale power outage. During these types of situations, the government purchases more coal from other countries.

We should be aware of a few other aspects of India's power sector as well. Various companies handle India's power generation and distribution. The only company mining coal in India is Coal India Ltd, a government-owned corporation. Coal India Ltd is a company that sells coal to power plants. The company that distributes power to the end-users is known as a Power Distribution Company (DISCOMS). Public and private companies work as DISCOMS.

In India, who sets the electricity prices?

In Delhi and Punjab, political parties provide people with their first 200W of power for free. This is a minor setback for governments or political parties, but it benefits those parties or governments enormously. As a result of this, DISCOMS is at a loss. Another reason for the loss is that many companies refuse to give DISCOMS their electricity prices, resulting in a large number of bad debts. The issue is that these DISCOMS will not turn off the power to those businesses because doing so would affect the people who work there and their families, as well as cause a financial crisis for the state. Because of it, DISCOMS are in huge losses. According to NITI AAYOG, DISCOMS has a debt of 1.1 lakh crores. It will have an impact on power generation companies as well. Power generation companies also have a high number of bad debts. Coal India companies are not receiving payments as a result of this. The debt of Coal India companies is estimated to be around Rs. 12300 crores. Thus, India's power sector is inefficient. If there is an urgent need for power, this sector will make it inefficient to produce, transport, generate, and distribute power.


Let's look at the real cause of India's power crisis.

The main cause of the current power crisis is the rising electricity demand. As we can see, the temperature is rapidly rising across India. The temperature in the northern part of India ranges from 44 to 48 degrees Celsius. The temperature is expected to rise further, according to all temperature analytical maps. If we look back in time, we can see that March 2022 was the hottest in 122 years. Because we can't survive without electricity in these conditions, the use of fans, refrigerators, and air conditioners will also rise. As a result, the demand for power in India has skyrocketed. 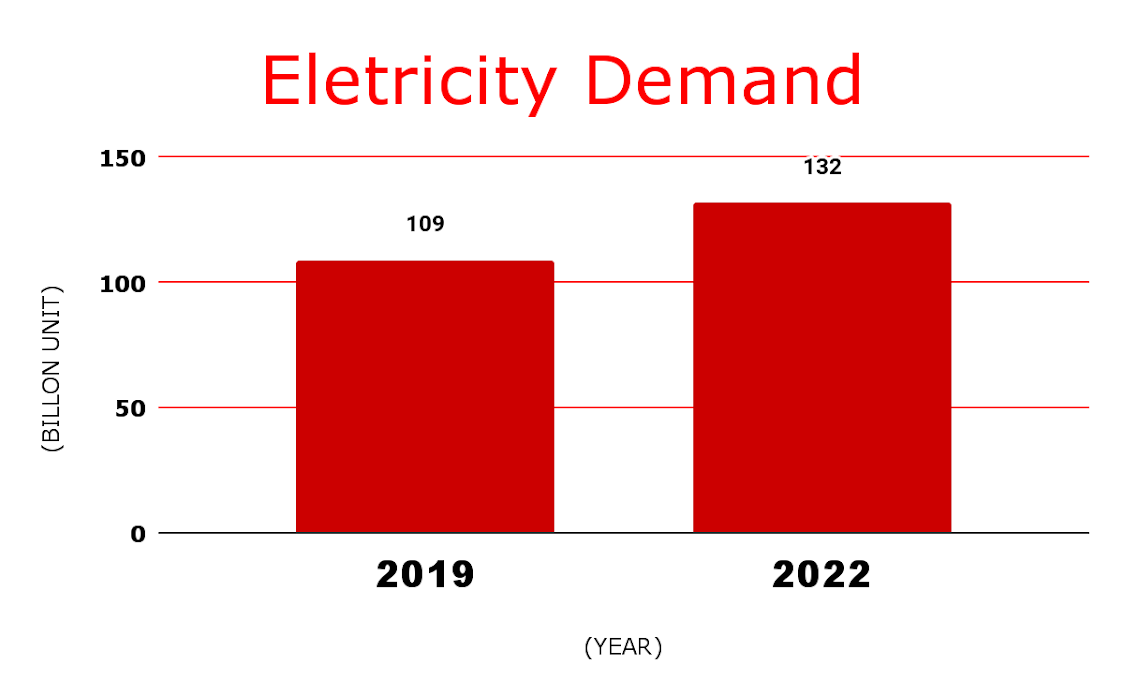 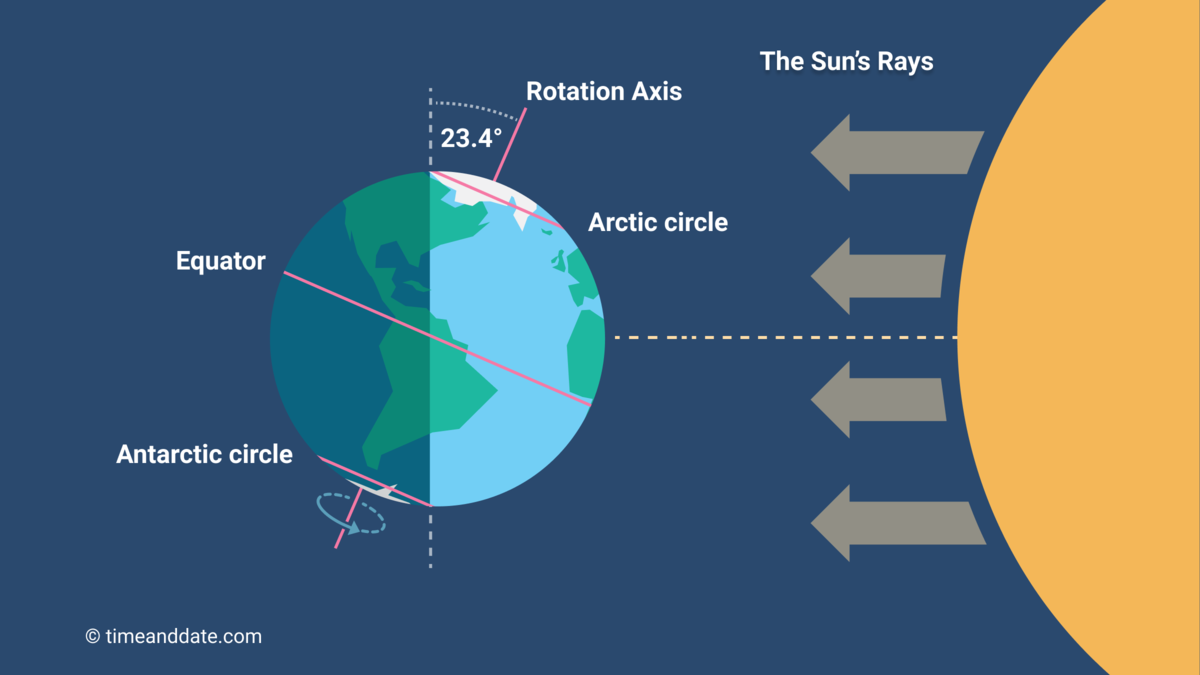 As a result of all of the problems, the electricity demand is increasing, but the supply is not keeping up. The most serious issue is a lack of coal for electricity production due to the Just-in-Time procurement system and inefficiency in the power sector, as we discussed earlier. As per the latest data, coal stocks at more than 100 thermal power plants in India have fallen below 25% of the liquid stocks. In more than 50 thermal plants, the stock has fallen below the 10% mark, so any time the operation should stop. Almost nine coal power plants have shut down due to a lack of coal. The lack of coal in India is the primary cause of the country's current power crisis. In these circumstances, the country will purchase coal on the international market, but the impact of the Russian-Ukraine conflict will be significant. As a result of the war, Russia has cut off gas supplies to European countries. So European countries purchased more coal on the international market, so the price of coal has risen. 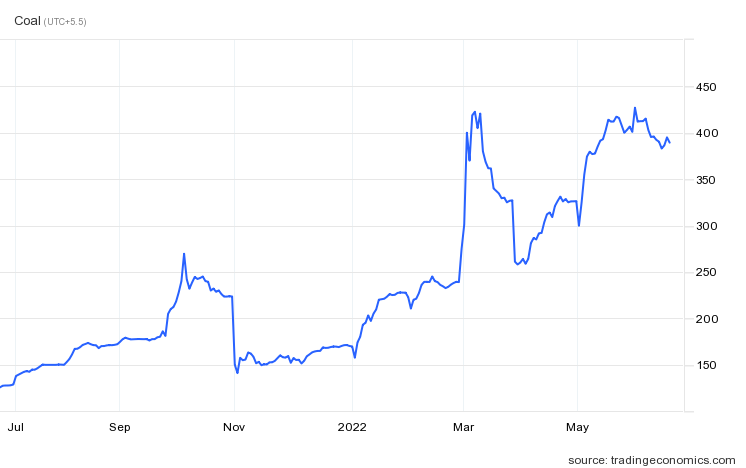 The graph shows that the price of coal increased roughly four times. This price hike will not affect some companies, such as the Adani Group in India, who buy coal on a long-term basis, but it will affect buyers who buy coal on a short-term basis. So the price hike will affect India because we buy coal from the international market in high demand. As a result, India should meet the demand for Indian coal itself, but there are numerous issues within the country.


Let's see how the government addresses this issue.

The first thing they do is increase the mining of coal. As we can see, the coal India company is working much more quickly and efficiently than last year. Around 400 passenger trains have been capped, and more coal-transporting cargo trains are scheduled to assist power generation companies. However, this will not be effective in a matter of days; it will take weeks or months to meet the demand. As a result, the government imposes power cuts and instructs industrial companies to reduce their working time by half.


What can our government do to tackle this issue in the future?

The government can never say that people should use less electricity because the heat is rising every year as part of climate change. We can't survive without a fan, fridge, or air conditioner because of the extreme heat. The government can't tell people to use less electricity. The government can never tell industries to use less energy because this will have a negative impact on our economy. Our economy can only grow if there is a lot of industrial production in India. So what should we do? One option is to produce a large amount of coal, store it, and use it whenever it is needed. When we consider this, there is another issue when we burn more coal into the atmosphere, causing climate change and temperature to rise again. When the temperature increases, we use more electricity. To meet the demand, we need to produce more coal. This process will continue as a chain reaction. So what we can do is find new technologies and generate power from renewable sources. Also, learn about the issues that our power sector is facing. What the government can do is address the issues that our power sector is experiencing.