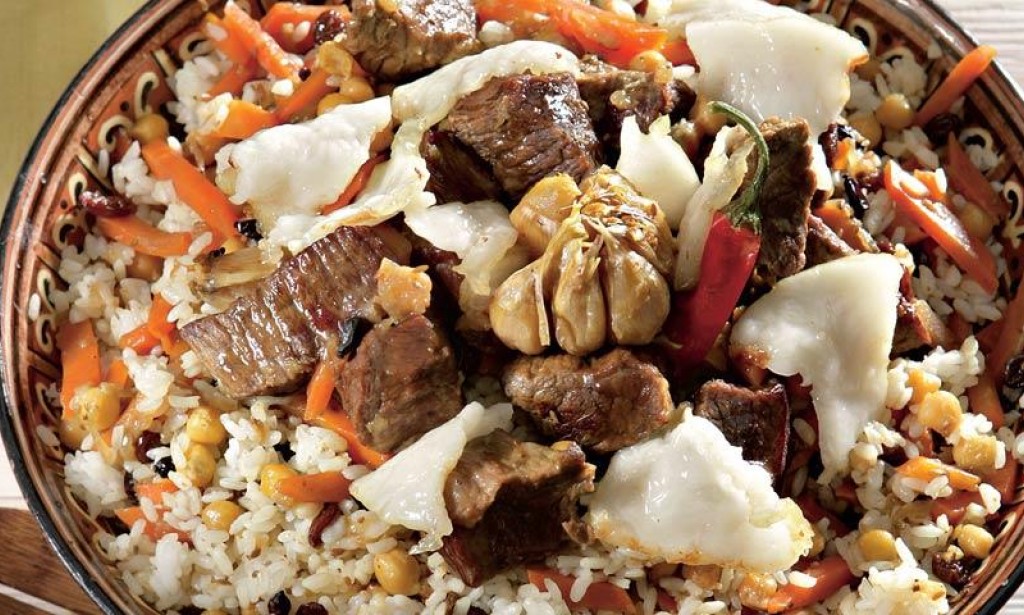 Tashkent pilaf used to be cooked in the capital of Uzbekistan only on major holidays. Today, it replaces the Chaykhan pilaf, which recently was considered the most popular type of this dish. How does one differ from the other? First of all, the Tashkent chickpea is included, which makes the texture of the pilaf denser and the taste richer. Bones are not added to the "metropolitan" version, but fat of sheep fat is in excess. As a result, the dish becomes unusually fragrant and dizzyingly appetizing. Will you be able to make it? We are sure it will! If you cook it by the same recipe and for example your friend, you will get two different-tasting but equally delicious Tashkent pilaf. Why is it so? Because, according to experts, the result is influenced by water, air, quality of ingredients and even the mood of the cook. No need to compare and analyze: just try and get a vivid gastronomic experience!

turmeric - on a tip of knife

Prepare the chickpeas for the Tashkent pilaf. To do this, pour it into a pot and pour plenty of water. Leave for 24 hours. Rinse the chickpeas in a colander and rinse under running water.

Cut the lamb chops into 8 to 10 chunks for the pilaf. Measure out 100g of the rendered fat and cut into 1 cm cubes. Slice carrots into thin 5-6 cm long julienne strips. Cut the onions into half rings. Cut off the root of the garlic heads and remove the top layers of skin, leaving only the thinnest one.

prepare the rice for the tashkent pilaf. rinse it seven or eight times in plenty of water until it becomes transparent. then fill the rice with warm water (37°c) and salt generously and leave for 1 hour. pour a small amount of hot water over the sultanas

prepare the zirvak for the pilaf. heat oil in a cauldron over high heat until a white smoke appears. dip diced fat and a large piece of fat into it. fry until golden. do not stir in the smaller cubes of fat. flip the large piece so it fries on all sides. remove with a slotted skimmer to a plate

in a cauldron of boiling fat, put the lamb and fry until the liquid evaporates and golden crust on the pieces. then add onions and fry until light yellow. Flatten the meat with the onions, spread the carrots on top.

At the "first water" stage of cooking pilaf, pour 1.25 liters of hot water into the cauldron. Press carrots with a slotted spoon and dip garlic heads and chili peppers into the future zirvak. Add the sugar and all the spices by mashing the zira with your fingers.

Place the chickpeas on top of the carrots and flatten. Braise without a lid for 40-60 minutes. In the middle of the process, remove the garlic heads and peppers and set aside. Submerge the fried piece of fat into the zirwak. Braise until most of the water has evaporated, so that a layer of rice can be safely placed on the zirvak. At the end, salt heavily (more than necessary).

Drain all the water from the pilaf rice. Place the rice on the zirvak and smooth it out. Pour the hot "second water" through a skimmer so the water doesn't "beat" on the rice layer. Add enough water to just barely reach the top grains. Flatten the rice again and salt a little.

Increase the heat to high. The zirwak and water should boil evenly and give a powerful steam that will work the rice. Then it will "take" as much liquid as it needs. The water should evaporate down to the zirwak layer.

"Cover" the pilaf. First, taste the rice: it should be dry, but almost cooked (the inside is not crispy). Carefully, with a slotted spoon, gather the rice in a half ball from the walls to the center. Sprinkle with sultanas, stick chili peppers on top. With a thin chopstick, make several holes to the bottom of the cauldron.

Pour a teaspoon of hot water into the holes. Flatten the surface. Close the cauldron tightly with a lid and reduce the heat to minimum. Cook for 30 minutes. Remove the fat along with the fat of lamb. Cut the meat into small pieces and the fat into thin plates.

On a large flat dish (lagan), place a pile of rice, carrots, chickpeas, and sultanas. Spread the meat on top. Arrange the turkey fat petals right on the edge of the dish on top of the Tashkent pilaf. Place garlic heads and peppers on top.