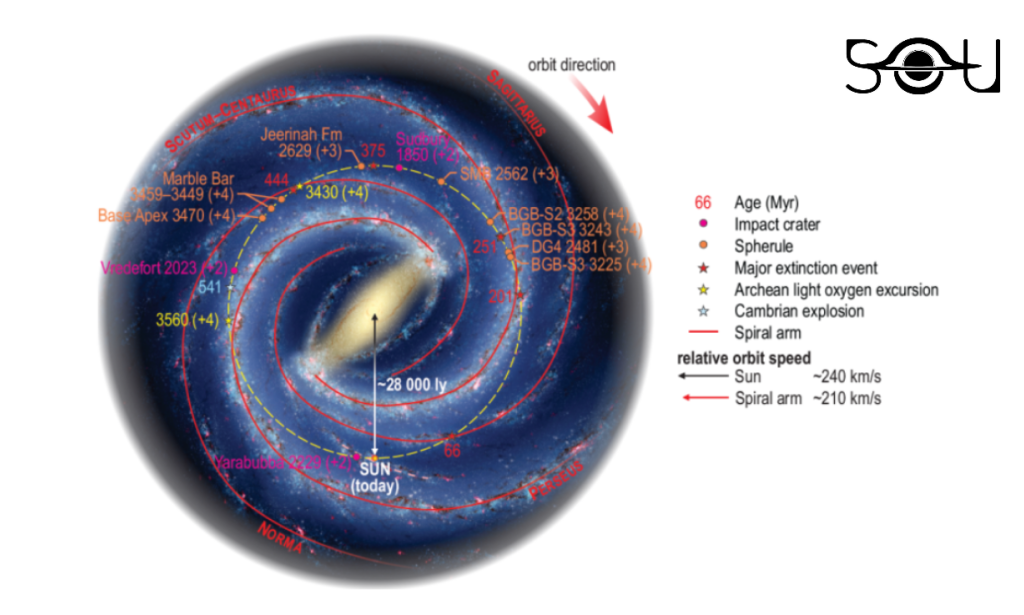 with periods of increased crust production roughly every 200 million years, corresponding to the solar system’s transit through the four primary spiral arms of the Milky Way galaxy. According to the study published in the journal Geology yesterday, regions of space with dense interstellar clouds may send more high-energy comets crashing to the surface of the Earth, seeding enhanced production of continental crust.

“As geologists, we normally think about processes internal to the earth being really important for how our planet has evolved. But we can also think about the much larger scale and look at extraterrestrial processes and where we fit in the galactic environment,” explains Chris Kirkland, lead author of the study.

Among its many unique features, Earth remains the only planet we know of that hosts continents and active plate tectonics. Plate-tectonic processes have helped make our planet hospitable to life—shaping the composition and behavior of the hydrosphere, atmosphere, and biosphere.

The data used in this new study came from two places where Earth’s earliest continental history is preserved: the North American craton in Greenland and the Pilbara craton in western Australia. In both locations, decay of uranium in zircon crystals has been used to establish a timeline of formation, spanning the period from roughly 2.8–3.8 billion years ago, during the Archean eon. Hafnium isotopes measured within the zircon were used to identify periods of time when there were influxes of juvenile magmas associated with crust production. Using mathematical analysis, the researchers uncovered the longer period pattern corresponding with the “galactic year.” They observed a similar pattern when looking at oxygen isotopes, bolstering their results.

The researchers point to galactic traffic as the likely source of this pattern. Our Solar System and the spiral arms of the Milky Way are both spinning around the galaxy’s center, but they are moving at different speeds. While the spiral arms orbit at 210 km/second, the sun is cruising along at 240 km/second, meaning it is surfing into and out of spiral arms over time. At the outer reaches of our solar system, astronomers believe there is a cloud of icy planetesimals—named the Oort cloud—orbiting our sun at a distance of between 0.03 to 3.2 light years (for comparison, the Earth is 8.3 light minutes from the Sun). As the solar system moves into a spiral arm, interaction between the Oort cloud and the denser material of the spiral arms could send more icy material from the Oort cloud hurling toward Earth. While Earth experiences more regular impacts from the rocky bodies of the asteroid belt, comets ejected from the Oort cloud arrive with much more energy. Kirkland explains, “That’s important because more energy will result in more melting. When it hits, it causes larger amounts of decompression melting, creating a larger uplift of material, creating a larger crustal seat.”

Spherule beds—rock formations produced by meteorite impacts—are another key piece of evidence linking periods of increased crust generation to comet impacts. Spherule beds are deposits of small spheres formed either as ejected impact melt or condensed and rained out from rock-vapor plumes after impact. The authors of the study observed that the ages of spherule beds are well-correlated with the solar system’s movement into spiral arms around 3.25 and 3.45 billion years ago. Determining the ages for more deposits of spherule beds could add more evidence to the story.

Phil Sutton, an astrophysicist and coauthor of the study, explains that these findings should motivate more investigation of how forces outside the solar system have shaped our planet. “It’s very hard to prove these things; we want to make that link and start the conversation to look at geological processes beyond the Earth, beyond the Solar System, and what might drive those. We didn’t just form in isolation.”