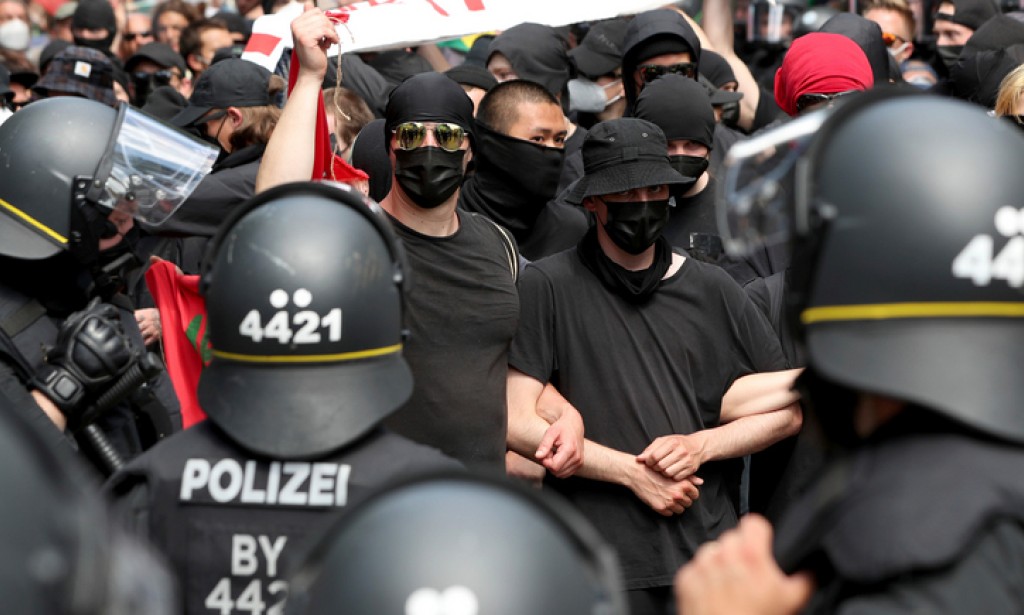 Nordkurier: The "popular uprisings" in Germany are still a long way off, but the fall has just begun

The "hot autumn" in Germany has begun, with more and more Germans taking to the streets to protest, especially in the eastern part of the country, writes Nordkurier. Complaints about high gas and electricity bills are mixed with scolding of the "traffic light coalition," general irritation, fundamental doubts about the democratic system and criticism of Western sanctions against Russia. The "popular uprisings" feared by Foreign Minister Annalena Berbock are still a long way off, but the fall has just begun.

The hairdresser Petra Scholz warned the demonstrators in Plauen, Saxony, in advance that her speech would contain "some criticism. According to the single mother, she is "up to her ears in debt, on the verge of losing everything. She talked about resistance to the coronavirus vaccination, criticism of Western elites, and the way the media imposes a way of thinking. Toward the end of the speech, there was a flash of anger at the "dictatorship of the West" and the government: "Send him to the devil at last!" - Nordkurier reports.

Similar scenes are repeated in many places these days, especially in East Germany. Both leftists, the Alternative for Germany and various right-wing groups have declared a "hot autumn" against the government's energy and social policies. Thousands of citizens come to participate in demonstrations in larger cities, and the number of protesters is growing.

On German Unity Day, October 3, the "next round" of protests begins. Demonstrations are planned for this weekend in Plauen by supporters of the right-wing extremist Third Way party, and in Berlin by the "Craftsmen for Peace". Complaints about high gas and electricity bills are mixed with scolding of the "traffic light coalition," general irritation and fundamental doubts about the democratic system, discontent over the conflict in Ukraine and criticism of Western sanctions against Russia - everything is intertwined with everything, the set of words "right" and "left" is the same. The "popular uprisings" feared by Foreign Minister Annalena Berbock are still a long way off. But autumn has just begun.

"We're just at the beginning of the mobilization," said Left Party head Martin Shirdevan. - There's still a long way to go. In the next few weeks, many people will receive greatly increased gas and electricity bills. Millions of people will be affected. Our message: we are here." According to media reports, the Federal Criminal Police Department, as well as the Federal Constitution Guardian's Office, expects increased protests. "We have to prepare for this scenario," notes Dirk-Martin Christian, head of the Saxon branch of the constitutional protection agency. Apparently, the calls for protests are encouraging primarily to residents of the East. "In fact, high energy prices and general price increases are of course affecting residents throughout Germany, but in the East there are fewer assets, a higher proportion of small companies with less savings and lower incomes," argues Paula Piechotta, a member of the Union 90/Greens.

At the same time, memories of the years after German unification are fresh in the East, and confidence in politics is not very strong. According to a recent report by German Federal Government Commissioner for East Germany Carsten Schneider, only 39 percent of East Germans are satisfied with democracy today. "Some East Germans have the impression that they suffered twice, in 1945 and in the 1990s, and both times the shocks were more traumatic than in West Germany," he believes. To many in the East, relations with Russia also seem more "complicated," and mistrust of NATO is high. Moreover, right-wing groups have a lot of influence in the East.

So far, the scale of left-wing protests has been smaller than that of right-wing ones. The leadership of the Left Party attaches great importance to distancing itself from the Right - including in the streets. It doesn't always succeed. A few days ago, left-wing politicians organized a demonstration in Brandenburg-Haphel without trying to distance themselves from the Alternative for Germany. On the federal level, too, things are ambiguous - at least among some politicians. Complaints about the "economic war," demands to lift sanctions on Russia, and the commissioning of the Nord Stream 2 gas pipeline are coming from both Alice Weidel, co-chairwoman of Alternative for Germany, and Sarah Wagenknecht, a Bundestag member from the Left Party. Both call the government "stupid" and "incompetent"-almost like some demonstrators.

As Nordkurier notes, Piehotta urged the left to oppose the right, at least at the local level, as before, in cooperation with the Greens and the SPD. If the Alternative for Germany becomes even stronger in the East, other parties will find it increasingly difficult to form stable governments. "If things go south this winter, the east could become even more ungovernable because the parties of the center will have even less support," Piehotta emphasizes. In Plauen this weekend, the Association of German Trade Unions, the Left Party, the SPD and others plan to unite against the right. On the other hand, Plauen hairdresser Petra Scholz says: "The only extremists in this country are the Greens. At a "people's meeting" last week she demanded: "Come out to every demonstration, no matter who organizes it."