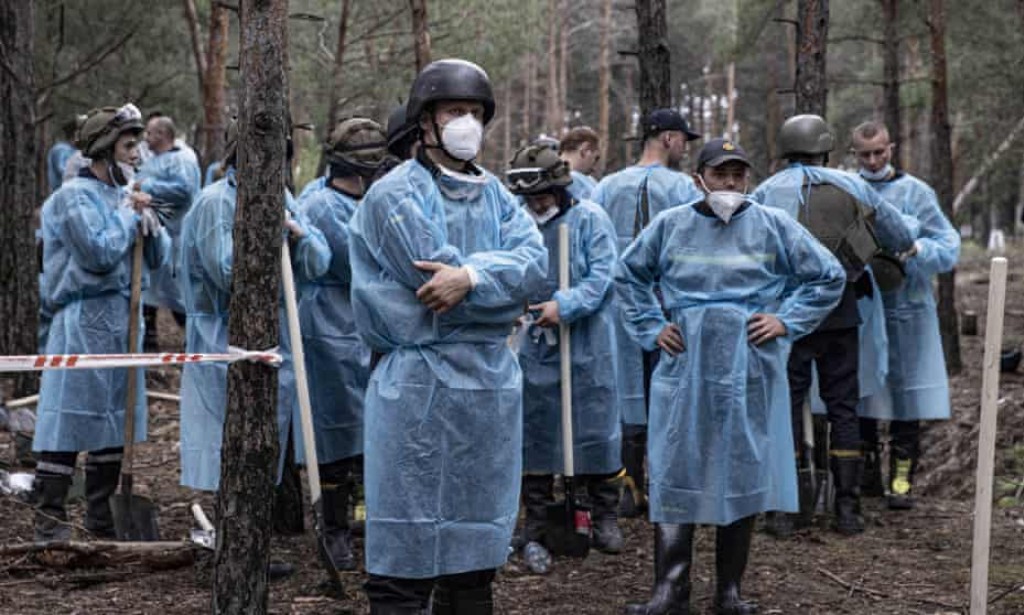 Investigators and exhumers are still hard at work at the mass grave site discovered at Izium, one of the many recently liberated villages in the Kharkiv region. Dmytro Lubinets, the Ukrainian parliament commissioner for human rights, described finding an entire family, killed in an airstrike, buried together.

“This is a young family,” he wrote on Telegram. “The father was born in 1988, the wife was born in 1991, their little daughter was born in 2016, and their parents. We have testimonies from local people that they all died as a result of an airstrike carried out by planes of the military army of the Russian Federation. There are many, many similar cases.”

Lubinets said investigators have also exhumed the bodies of Ukrainian army servicemen, who were killed at close range, with their hands tied.

“This is the genocide of the Ukrainian nation,” Lubinets said. “These are the murders of our children, our women, our men, and this is the civilian population.”

The truth, they say, is the first casualty of war. With correspondents on the ground in Ukraine covering the war, as well as throughout the world, the Guardian is well placed to provide the honest, factual reporting that readers will need to understand this perilous moment for Europe, the former Soviet Union and the entire world. Free from commercial or political influence, we can report fearlessly on global events and challenge those in power.

We believe everyone deserves equal access to accurate news. Support from our readers enables us to keep our journalism open and free for everyone, including in Russia and Ukraine.

Putin: Russian invasion of Ukraine was response to West

Russian president Vladimir Putin on Friday said he sent Russian forces into Ukraine in February in response to the West wanting to break up Russia, Reuters is reporting.

Putin was speaking at a summit of the Shanghai Cooperation Organisation. Discussing the war publicly for the first time since Ukraine’s dramatic counter-offensive ousted Russian troops from the Kharkiv region last week, Putin threatened continued strikes on Ukrainian infrastructure, and said: “We will see how (Ukraine’s counteroffensive) ends.”

US to provide an addition $600m in security assistance to Ukraine

The US department of defence announced today that it was providing an additional $600m security assistance to Ukraine to meet the country’s “critical security and defence needs”.

According to the defence department, this package will include: