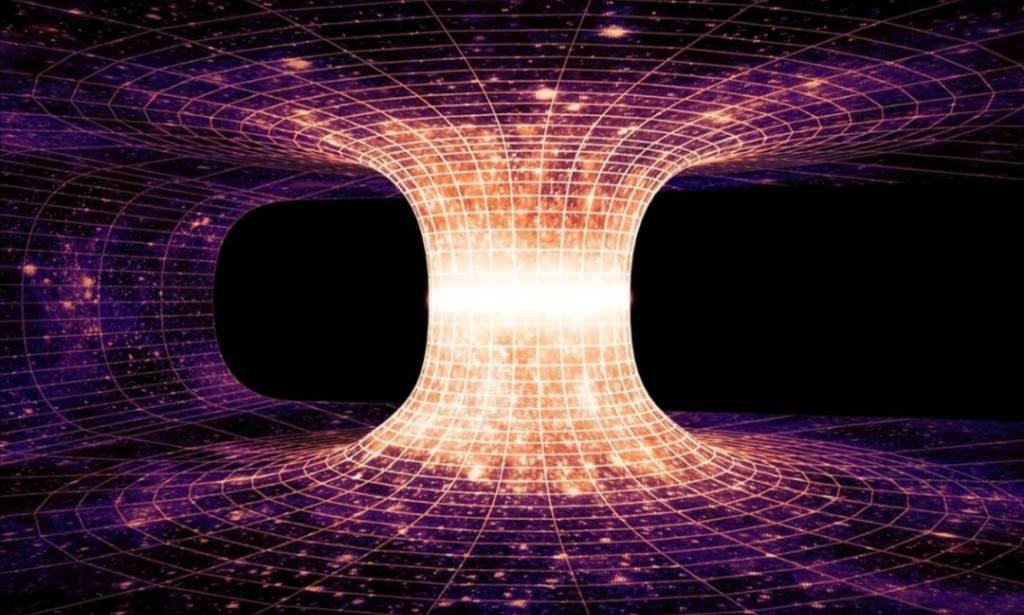 Scientists continue to search for evidence of wormholes

Physicists around the world have been fighting over the mystery of the so-called Einstein-Rosen Bridge, better known as a wormhole or wormhole - a portal that allows one to travel through different universes. In fact, the bridge is a mathematical extension of the general theory of relativity (GTR).

The concept proposed in the twentieth century by Einstein and Rosen describes the wormhole as a kind of fold in space-time. Let us imagine an insect that walks along a stretched string with a length of conditional 20 cm forward from point A to point B. However, if you fold the string in half so that the two opposite points touch, the insect will need to take only a few steps.

Despite the fantasticness of the theory, mole holes are often present in various equations and help physicists to describe the structure of the Universe or the motion of celestial objects.

Scientists believe that wormholes themselves are unstable and cannot stay open for a long time - that is, it is not always possible to go through them, there may well be a dead end at the end of the conditional tunnel. For convenience, they called the entry-exit points as mouths, and the tunnel itself as a throat.

In 1988, American physicist Kip Thorne - the same one who originated the idea for the science fiction film Interstellar directed by Christopher Nolan - suggested that mole holes could be opened by matter with negative mass, which repels other matter known to us from itself. Other scientists believe that small wormholes with such exotic energy appeared after the Big Bang, and as the universe expanded over time, they increased in size proportionally.

Luke Butcher, a foreign physicist at Cambridge University, based his speculation about wormholes on the Casimir effect, a phenomenon that explains the mutual attraction of uncharged bodies due to fluctuations in space. Negative energy acts against gravity, supporting the wormhole. According to Butcher, the wormhole itself can generate such energy.

He explained that if the tunnel in the wormhole is longer than the width of the mouth, negative energy can form in the center of the throat. Because of this, the wormhole.

One theory revolves around the study of the supermassive Sagittarius A black hole - it is suggested that one of the mole holes may exist inside it. In this case, according to scientists, gravity would affect the nearest stars at the other end of the tunnel. Then it would be possible to detect the wormhole by studying different deviations in orbits near the supermassive black hole.

One such object for study was the star S2, which is really close in relation to Sagittarius A. But the existing technology, alas, is not enough to consider the deviations in the orbit of this star.

Nevertheless, even if such instruments appear and some deviations can indeed be detected, this is still not enough to say that wormholes exist. In addition, it will not be possible to find out whether the wormhole is passable or not, and this is the most important question.

Assumption based on string theory

According to string theory, the whole world is not just made of particles, but of infinitely thin oscillating objects similar to the strings of musical instruments, which is how this hypothesis got its name.

Let's consider it more objectively on a sheet of paper. If we enlarge it, we first see molecules, then atoms and elements of the nucleus. This is where physicists come in, who will remind us that there are quarks, tiny particles, inside neutrons. And the bulk of scientists at this point complete the chain, believing that there is nothing further. However, according to string theory, there will be those vibrating strings inside quarks.

One of the difficulties of this hypothesis is that strings cannot exist in four dimensions - for example, we only know about three spatial and time. However, according to string theory, there are at least ten of them.

So, what does this have to do with wormholes? Recently a group of physicists from Britain and the USA suggested that in string theory mole holes may arise due to ruptures of one of them - a relic object, which is a fold of space-time.

Scientists have modeled a situation in which a rupture of the space-time string is possible. In this case, a mole hole would form, which would allow movement from one point of the torn string to another, as in bypassing a section on the road where repairs are being made.

These days, physicists are thinking about whether it would be possible to send the human genome through a wormhole if one existed. Hypothetically it is indeed possible to save humanity, to move it as a species from a dying universe to another one that has only recently formed.