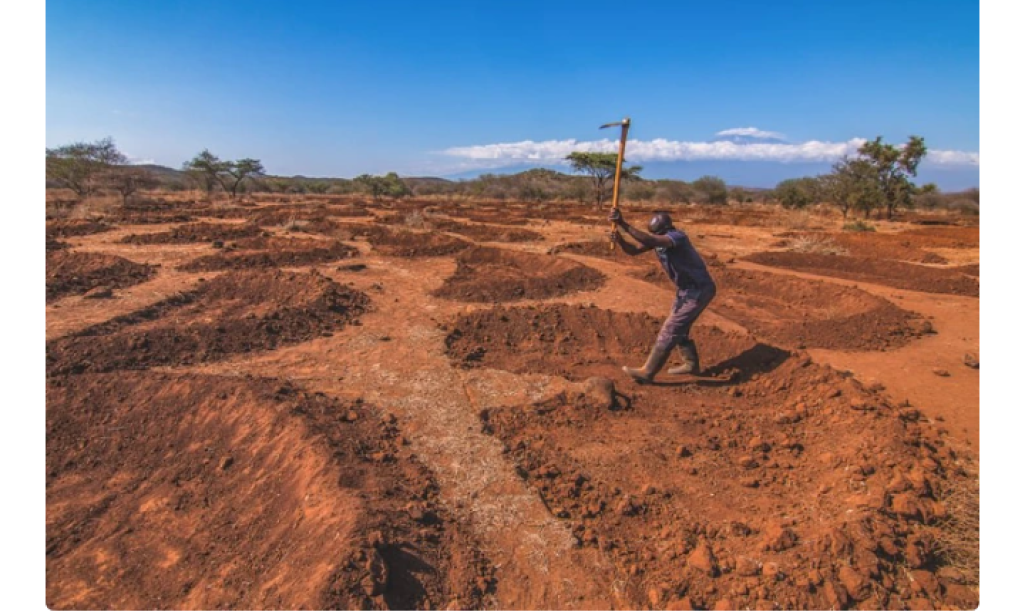 The case for low tech land restoration mounts up

Bunds are simple structures that have been used for thousands of years to keep a liquid in or out. In Kuku, southern Kenya, they have been used as a water management strategy to revive and regreen degraded land. Non-profit Justdiggit worked in collaboration with the Maasai Wilderness Conservation Trust and the local Maasai community to restore arid, overgrazed land, digging over 150,000 bunds. courtesy Justdiggit

A composite image from 2018-2020 of bunds regreening an area of Pembamoto, Tanzania. The local community left the area to regreen over the course of three years before beginning to harvest grass sustainably for fodder. courtesy Justdiggit

An aerial view of bunds turning green in Arusha, Tanzania. Regreening can have multiple benefits, including reducing the ground surface temperature. courtesy Justdiggit

An aerial image of bunds trapping rainwater after a downpour. The bunds are designed to slow surface run off and allow water to penetrate the ground, promoting plant growth, improving soil structure and reducing erosion. courtesy Justdiggit

An aerial photograph of cell bunding on peatland that had been a tree plantation in Tullychurry, Northern Ireland. By removing trees and installing cell bunding -- which creates water-tight pockets -- Norther Ireland Water tried to determine if bunding could restore peatland, which naturally filters the country's drinking water. courtesy NI Water

The cells were dug across six hectares in late 2020 and monitored for a year. A study is due to be published later in 2022, according to Diane Foster of Northern Ireland Water. courtesy NI Water

Sphagnum moss is an essential feature of peatland. The moss, which grows in wet, boggy conditions, decays over time to become fresh peat, a vital global carbon store. By using bunding to raise water levels, researchers in Northern Ireland aim to promote the growth of the moss. Adobe Stock

Northern Ireland Water hopes that water running into the lake will be filtered through the restored peatland. "It's going to take a bit of time for the sphagnum mosses and everything to colonize, but the process is now underway," says Foster. courtesy NI Water