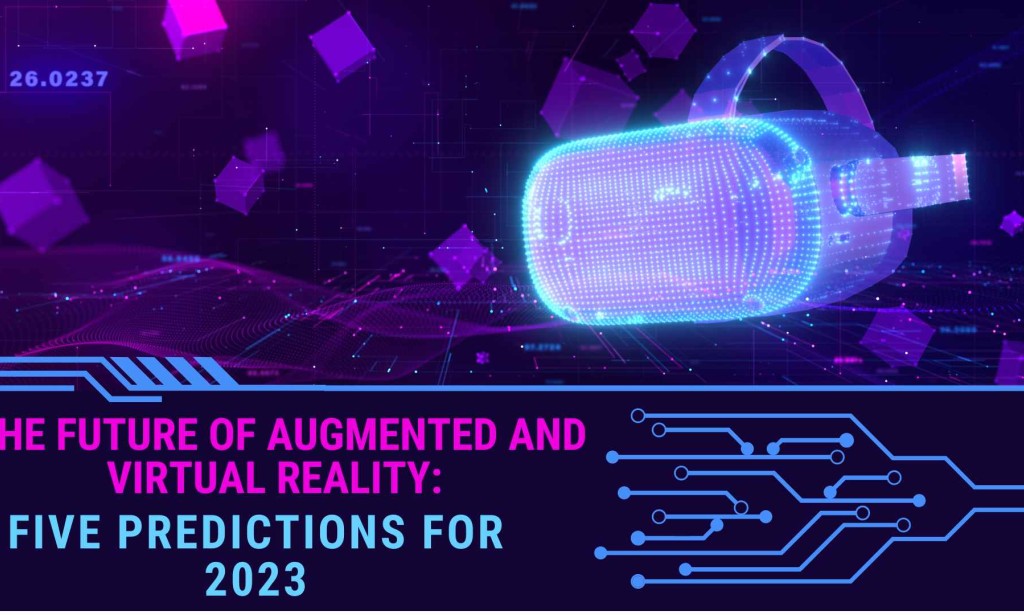 The Future of Augmented and Virtual Reality: Five Predictions for 2023

Imagine a world where you can experience anything, and I mean anything, without ever having to leave your home. A world where you can step into another reality and explore new worlds, or even reconnect with long-lost loved ones. This is the future of augmented and virtual reality, and it's already here.

1. AR and VR will merge to create a new form of immersive reality.

2. The use of AR and VR will become more mainstream, with more people using it for everyday tasks.

3. The quality of AR and VR will continue to improve, making the experience more lifelike.

4. AR and VR will be used for more than just entertainment; it will also be used for education, business, and healthcare.

5. The cost of AR and VR equipment will become more affordable, making it available to a wider range of people.

The Rise of Augmented Reality

You might be wondering what the future of augmented and virtual reality looks like. Well, I have some predictions for you.

In the next five years, I predict that there will be a rise in the use of augmented reality. More and more companies are going to start using it for training employees and marketing purposes. For example, Walmart is already using AR to train its employees. And one company, called Sticky, is using AR to create virtual showrooms for its customers.

I also predict that we will see more AR games being developed. These games will be more realistic and interactive than ever before. And we will start to see new genres of AR games being created.

So what does this all mean for you? It means that if you're interested in working in the AR industry, now is the time to start learning about it and getting involved in it. There are going to be lots of opportunities in the next few years.

The Fall of Virtual Reality

There are a few reasons for this. First, the current generation of VR headsets is too bulky and impractical for everyday use. They're also really expensive, so not many people are willing to invest in them.

Second, the content that's available for VR right now is really limited. There are only a handful of good VR games and experiences out there, and most of them are short and not very replayable.

Finally, VR isolation is a real problem. When you're wearing a headset, you're cut off from the outside world and it can be really disorienting and uncomfortable. I think people will start to get sick of VR pretty quickly once they realize how isolating it can be.

The Blurring of the Lines Between AR and VR

Right now, there's a big distinction between augmented reality (AR) and virtual reality (VR). But in the next few years, that distinction is going to start to blur.

For example, one of the most popular AR games right now is Pokemon Go. But as the technology gets better, we're going to start seeing more AR games that look like traditional video games, where you're fully immersed in a digital world.

And on the VR side, we're already starting to see VR headsets that allow you to interact with the real world. So instead of being fully immersed in a digital world, you'll be able to see the real world with a digital layer on top of it.

The Rise of Haptic Feedback in AR and VR

You'll also start to see haptic feedback become more common in AR and VR experiences. Haptic feedback is basically the use of technology to create the sensation of touch. You might be familiar with it already if you've ever used a video game controller that vibrates when you hit something on the screen.

In the past, haptic feedback has been limited to simple vibration, but new advancements are being made all the time. In the future, we'll see haptic feedback that's much more realistic and believable, making AR and VR experiences even more immersive.

The Popularity of Location-Based AR and VR Experiences

One of the reasons why location-based AR and VR experiences are so popular is because they're so immersive. You can really feel like you're in another place when you're wearing a VR headset, for example. And with AR, you can see things in a whole new way.

Location-based AR and VR experiences are also popular because they're social. You can go to an arcade with your friends and compete against each other in a virtual world, or you can go on a tour of a museum with an augmented reality guide.

There are endless possibilities for location-based AR and VR experiences, and as the technology gets better and better, I think we're only going to see more and more of them.

Five Predictions for 2023 in Augmented and Virtual Reality

1. The continued rise of AR and VR in gaming

2. The use of AR and VR for training and education

3. The use of AR and VR for entertainment and events

4. The use of AR and VR for retail and e-commerce

5. The use of AR and VR for communication and collaboration

What Does This Mean for Businesses and Consumers?

What does this mean for consumers and businesses, finally?

For businesses, it means that they need to start thinking about how they can use AR and VR to enhance the customer experience. For example, Ikea has already started using AR to allow customers to see what furniture would look like in their homes before they buy it. And given that AR and VR are only going to become more widespread, it's likely that we'll see more and more businesses using these technologies in the next few years.

As for consumers, it means that we're going to have a lot more choices when it comes to how we consume content. We'll be able to choose between traditional 2D content, 3D content, and even interactive content. And given that VR headsets are becoming more and more affordable, it's likely that a lot of people will start buying them in the next few years.

Exciting things are on the horizon for augmented and virtual reality. As technology continues to develop, we can only imagine the possibilities that will become available in the next few years.

What do you think will be the most popular use for augmented or virtual reality in 2023? Will it be for entertainment, education, or something else entirely? Let us know in the comments below!