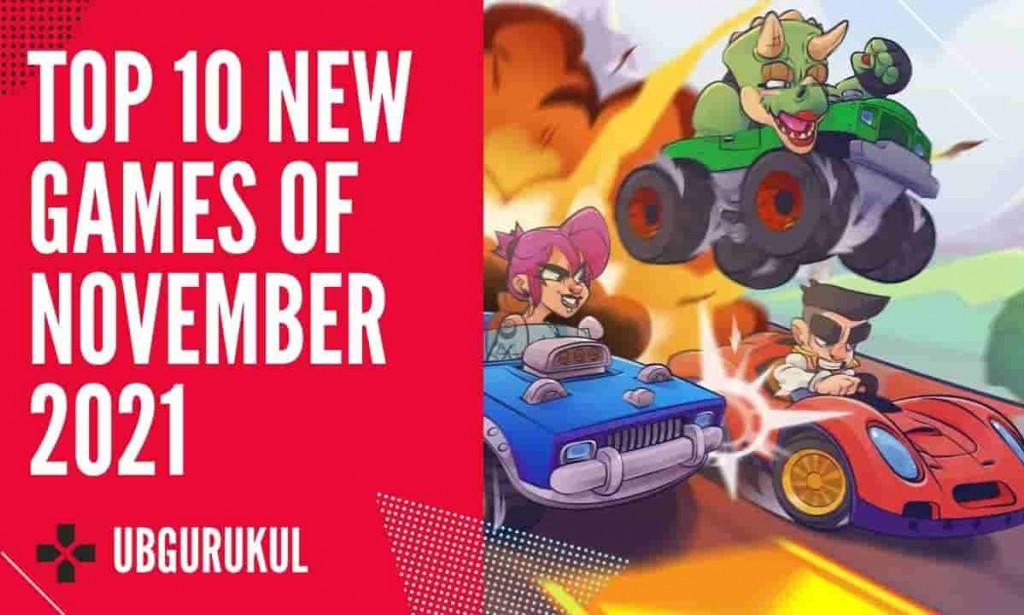 November is coming up fast, and a lot of new games are landing. Hi folks, it's Falcon, and today on Game ranks, new games that deserve your attention in November 2021.

Now, this is somewhere along the lines of Jurassic World Theme Park. It's a business simulation where you essentially make a theme park with dinosaurs. Now, this worked out really well in the first "Jurassic World Evolution," kind of dinosaur-themed "Zoo Tycoon" or "RollerCoaster Tycoon," somewhere between the two things. But it's a really well-liked game, and did really well for the developers. I'm excited to see exactly what they add for the second. The previous game was set on an island, where this one is now set on the mainland United States. So that provides for a lot more terrain and biomes, and one thing I've heard mentioned is that the maps for this one are significantly, I mean, a lot larger than the first game. I don't have measurements exactly, but between the more visible improvements that they've been talking about, the return of Jeff Gold Blum , Bryce Dallas Howard, it really looks like it's shaping up to be a fun entry to this franchise, and hopefully it's a long-running one that continues to improve over time. "Jurassic Park Evolution 2" is landing on Windows, the PlayStation , and the X boxes November 9th.

which is a fascinating open world investigation game that explores an era of Sherlock's existence that really no other story has in any depth explored. This is an adolescent Sherlock Holmes, who is just becoming an adult. He has a different best friend, still named John, but not John Watson, and there is a certain degree of vulnerability that they're specifically advertising this Sherlock to have. You're sort of constructing the Sherlock that everyone knows during the course of this story, and that sounds very interesting to me. We don't really get Sherlock Holmes origin stories ever, and when we do, he's usually of the age he usually has a lot of mysteries under his belt. He's usually experienced, usually knows what he's doing. Here, we're supposedly going to get a somewhat unearned arrogance, as you use the deductive reasoning and piece together clues in order to solve mysteries. I think this sounds like a very interesting and intriguing concept, and Frog wares has pulled off this type of game plenty of times, so I trust it. "Sherlock Holmes Chapter One" is coming to Windows, the PlayStation , and the X boxes on November 16.

Which takes on an interesting perspective of a zombie apocalypse game. You have been infected, and you ultimately will fall to the infection. That is the point of the game. When you take on a character, that's going to happen to them, period. The reason is there is a city behind a wall of humans who have survived the zombie apocalypse, and if anybody gets infected, it's agreed that that person has to leave. Your characters are infected. They have to leave. They go out into the wilderness, they survive, and take on tons of zombies in this rogue life. Now, I think this is a great idea for a scenario in which you can kind of go out, find hope for people. You can kind of be a use in your last period of time. It's clever because you die, you just start up as another survivor, and the game pretty much explains itself without having to. I liked this. I played the demo, which is by the way available if you want to play it now, and it is an enjoyable game. It's not the prettiest thing you're ever going to see, but it is a visually pleasing adventure game, and the top-down combat works really well in my opinion. I enjoy it a lot. That is coming to the PlayStation's , the X boxes , and PC on November 16th

Which is billing itself as the best World War II game. Now, that is a pretty tough order to fill, so I think they know they have an ace in the hole, or they're perfect at marketing, one of the two, I don't know, but I have to say I like the sound of the campaign. You've got modern warfare style mechanics, you got blind firing from behind cover, you got destructible environments, and you basically play through the establishment of the special forces to deal with the immediate fallout of World War II. There's also of course zombies, there's multiplayer. We all know we get in a full-ass "Call of Duty" game, and honestly, this could really be a good version of it. I'm looking forward to this, and I'm not typically looking forward to a ton of "Call of Duty" game. Every few titles of them, I'm more interested, and this is one that I've had my eye on a little . I think that it's going to be good. "Call of Duty: Vanguard" is hitting the PlayStation , the X boxes , and Microsoft Windows on November 5th.

An expansion to "Final Fantasy XIV" that continues the story and directly confronts the Gar lean Empire. For the most part, it's not said going to ere's going to be a lot of changes to the base game's systems. Like you're going to get quests the same way , you're gone a have the same battles, and that's not bad, 'cause "Final Fantasy XIV" is great. It's a game that has a very checkered history that resulted in really a superior product, and although this got delayed a year thanks to the pandemic, I think that ultimately continuing on with the "Final Fantasy XIV" narrative is a great idea, because frankly, it's a great and fun world to exist in. "End walker " is landing on the Play Stations and Microsoft Windows on November 23rd.

The overarching series that the "Persona" games are a sub-series of. The setup you will probably find familiar if you have played any of these games before, whether "Persona" or the main line series. The player is a high school student who's investigating demons with some friends. This version of it transports you from modern day regular Tokyo to an alternate universe, post-apocalyptic Tokyo, and the event ends up bringing these demons through to your Tokyo, and the whole story ensues. Obviously, Atlas really knows what they're doing with RPGs, and this and "Persona" have always been great series. I have no doubt this'll be a fantastic RPG. It's for the Nintendo Switch, and it's landing on November 12th.

Which is a mouthful, but it makes sense because it is a remake of "Diamond and Pearl." So they added adjectives, you know, let you know that it's way better, brilliant and shining, so to speak. The art style of this game drew some controversy, but I don't know that it's something that I would consider to be a detriment in any real way. I mean, it's obviously a new "Pokémon " game base d on old "Pokémon " games, so to some extent you have an idea what t o expect narrative , as well as with the last few "Pokémon " games, the mechanics that have been refined and brought into a 3D space. It's pretty, I think, easy to understand what you're going to get from this, so if the art style turns you off, I could kind of understand, but I have a feeling it's still going to be a great version of these game s anyway. Obviously being a "Pokémon " game, these are a Nintendo Switch exclusive, and "Pokémon Brilliant Diamond and Shining Pearl" are landing on November 19.

A game that in its beta did cause some controversy by being not particularly stable. DICE has made claims as to having fixed the issues that were brought up during then. This one is solely multiplayer, so they better have. The total lack of a single-player campaign means that they don't really have a lot to lean on if the multiplayer is buggy and bad. Now, keeping in mind the beta was fairly limited and held back by those problems that they claim to have fixed, it may not be a good representation of the game, and "Battlefield" at its best is always fantastic , really. It's a great first-person shooter, usually kn own for good level design, and some ideas sound like interesting modes in terms of styles of competition. Interestingly enough, the next gen stuff, PC, PS5, Xbox Series X and S, they'll support 128 player games, while the PS4 and Xbox One versions are only going to support 64 players at once, as if that's a small amount of players, and "Battlefield 2042" is coming to all of those plat forms on November 19.

Obviously, Forza Horizon" is kind of your arcade cousin to Forza , " and i n terms of which I prefer, I am a "Horizon" person . much prefer the slightly arcadey racing . However, this is by far the best looking of any "Forza " game ever. It's set in a fictionalized representation of Mexico, has a new weather system where you can see storms coming, there are multiple climates , multiple seasons, multiple biomes. There's also this mini arcade mod e they've added, where they have these minigames that you can find all around the map. It sounds like a lot of fun in terms of a multiplayer thing , and on to p of what we already normally expect from a "Forza Horizon" game, should b e interesting diversions. Obvioucly , it is exclusive to the X boxes and Windows. "Fora Horizon 5" is landing on November 9th.

We've already talked a lot about this. We did a video about the differences between the original games and these versions, and we're all pretty excited for it to be able to go back through "Grand Theft Auto III," "Grand Theft Auto: Vice City" and "Grand Theft Auto: San Andreas" with better graphics without losing the look and feel of the originals, while also modernizing the controls so that they play more like the contemporary "Grand Theft Auto" games. I think it sounds like the best of all worlds combined into one package, and it's coming out on pretty much everything. "Grand Theft Auto : The Trilogy - The Definitive Edition" is coming to the PlayStation , the X boxes , Nintendo Switch, and PC, digitally November 11th, and then on DIF.