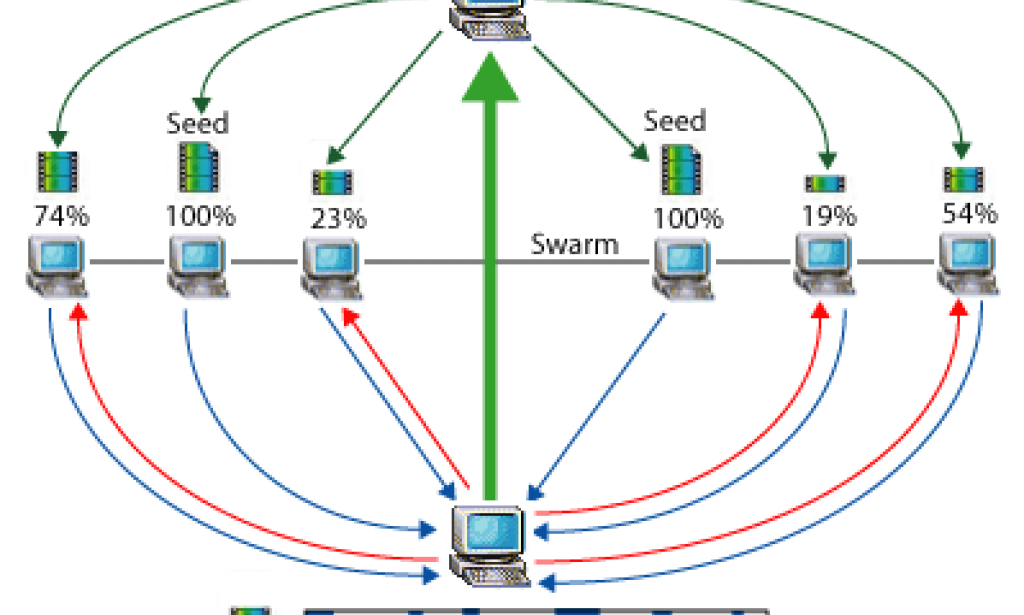 What is a torrent file and how does it work?

A torrent file is the file that is transferred among users using the torrent technology. The file extension used by torrent files is .torrent. Torrent files, when added into a torrent application, can be distributed among numerous amounts of people without the need of any major hardware costs and server fees on a particular individual. This is because each user supplies bits of the full torrent file to users without those particular bits, while receiving bits that they do not yet have. Therefore, torrent files can also be shared relatively quickly.

Torrent technology was first planned and developed by Bram Cohen in April 2001. After months of development, it first went public in 2 July, 2001. Today, Cohen’s technology is widely used. Although there are no specific measurements, it is considered as one of the most significantly used protocols in the Internet today.

Although torrent files and its sharing are technically a transfer of files over the network, it has its strengths compared to the old-school HTTP downloading style. Firstly, when downloading files, web browsers will make one HTTP GET request through one TCP socket. However, torrent files make numerous amounts of small data requests over many TCP sockets. Also, HTTP will download in an order—what is first will be downloaded first; however torrents download in a random way—whatever is of high availability will be downloaded first.

This is exactly why the torrent files have its strengths; it doesn’t need much financial back, it has a higher redundancy, and a better resistance to potential abuse from flash crowds than what would be a frequent thing with HTTPs. However, as with everything, there is a downside. It takes a bit of time for downloads to be running in full throttle, as connecting to other peers can tae time. Also, becoming an effective uploader also takes time. Not to forget, while torrent file downloading will reach immensely high speeds, the speed will eventually fall near the end of the download as availability of the bits of the torrent file decrease.

Surprisingly, torrent files are widely used today by many individuals and some corporations.

.torrent files are increasingly used by Podcasters to meet the high demands of these radio MP3s

Although torrent files seem to be another great way to download and share files, it has some limitations such as security issues.

IP Address Exposed: The use of torrent files can lead to anonymity issues, as all IP addresses of current and potentially previous swarm users can be found and abused

Internet Speeds: It is best to use broadband when sharing torrent files, so dial-up users cannot take full advantage of the torrent technology

Leeching Problem: While sharing torrent files is good, it doesn’t have many incentives behind it. Thus, there is no real reason to continue to seed after the download has finished. To fix this issue, some torrent sites have begun to limit the download speeds of users who do not upload often.

In today’s market there are both quality free open source and paid products to download torrent files.

BitTorrent: BitTorrent is the first and official torrent client made by Bram Cohen himself. It is supported in major operating systems such as Microsoft Windows, Apple, and Linux.

Azuerus (Vuze): This is also a widely used torrent client first released in SourceForge in June 2003. Released under the GNU General Public License, Azuerus is a constantly developed, free client.

µTorrent (uTorrent): uTorrent, also known as microTorrent, is a torrent client written in C++. Because of its small size but a powerful interface, it is another widely used free torrent client. It was first released on December 7, 2006 between BitTorrent, Inc. and Ludvig Strigeus, but was later fully acquired by BitTorrent, Inc. because of the application’s popularity, size, and power.