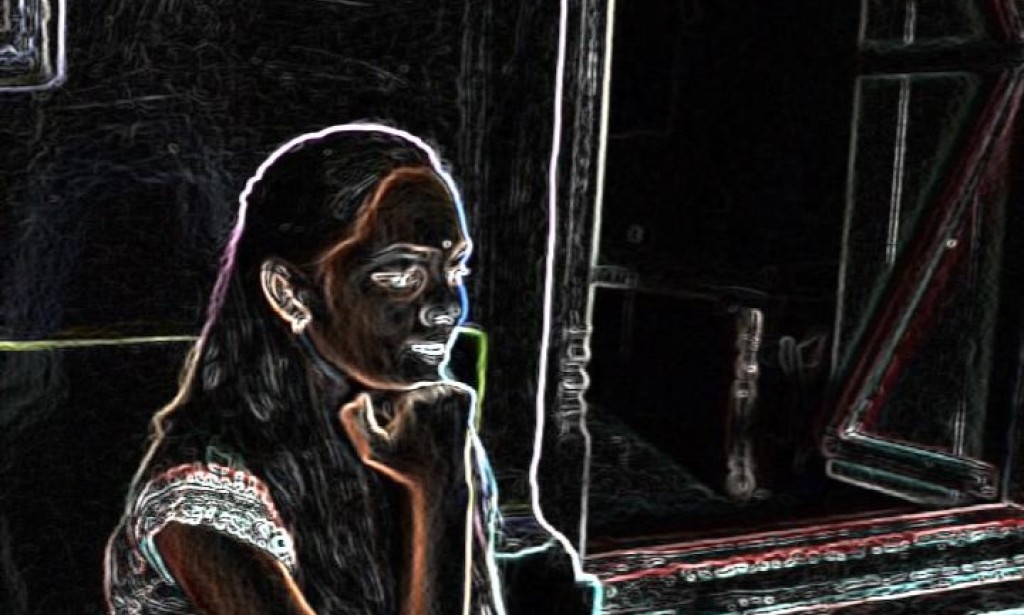 ★ A dusky girl with a beating heart

★ See the one whose dreams are somewhere, is it not me?

★ A dusky girl with a beating heart

As soon as Radhe stepped into the house, these lyrics of the song were heard in his ears. Suddenly a cute smile appeared on Radhe's lips,,,, (and the innocent face of Dyuti appeared in front of him,,,, lifting his eyes for a moment,,,, hey!!!!!!)

Radhe with mild anger;- How many times have I told you,,,,, that don't run here and there like this,,,,, you will fall,,,,, and you will get hurt,..., sometime my words Agreed,,,,, That girl didn't say anything, just kept looking at Radhe with a slight smile, blinking her big eyelashes,,,,, Radhe forgot his anger after seeing her innocence,,,, and Took her back and made her sit on the sofa and caressing her head gently. The girl innocently shook her head in no.  Radhe immediately called someone, ;- Aunty, put the food,

Radhe is spreading comfortably on the sofa, And he looked at Radhe Radhe also said further looking at Ruchi) but it seems you don't want to go, no problem!!!!! Radhe started getting up from there by saying,

Ruchi looking at Radhe with her innocent eyes,,,,, slowly,:- You will not eat food with me!!!!!Radhe smiled listening to interest,,,,,, she looked at her little,,,,, innocent,,,,, sister,,,, who did not like to speak at all,,,,, but when When she used to speak, it was as if flowers were falling from her tongue, Radhe immediately stood up from the sofa and bent down he lifted Ruchi in his lap and took her to the dining table,;- with you I will not only eat but will also feed you with my own hands. Ruchi smiled,,,,,, Radhe made Ruchi sit on the chair and himself also sat next to her,,,,, After that Radhe lovingly fed Ruchi with his own hand, both of them finished their dinner together. .. then Radhe Ruchi Took him to his room and made him lie down and covered him with a blanket,,,,,, and after turning off the light there, he went towards his room.  ,  ,  ,  ,  ,

When dhyuti reached the roof, she saw,,,,, Julie is sitting hanging her legs on the border of the roof,,,,, (The border of the roof of both the house was connected with each other. . . . .) Looking at Julie in front.  A smile appeared on Dyuti's lips,,,, moved towards Tili,,,,, and she also sat next to Julie hanging her legs on the ceiling border,,,,, Both of their faces were on the opposite direction,  ,,,,,, Due to which both were not looking at each other,,,,, but were definitely feeling,,,,, Julie said without looking at Dyuti,,,, You have come!!  !!!

Julie looking at the sky,;- You know what tomorrow is!!!!!

Julie turned her eyes and gazed at the moon Looked and said,;- Well tell me what is it,..., tomorrow....

Julie shook her head and said in her mind,,,, Nothing can happen,,,,, Then Julie's eyes fell on a falling star,,, She screamed,,,,, Seeing the light, a falling star  The star happened,,,, Quickly close your eyes and ask for a wish  Stayed,,,, Ghuti also closed her eyes,,,,,,

(Julie,; - I have always had only one wish,  But that smile of hers does not give peace to the heart but a pain. . . . Julie's eyes became moist.dyuti- I don't know whether the wish asked after seeing the broken star is fulfilled,,, or not,,,, and if it is,,, then you must give whatever Julie asked from you. Dyuti opened her eyes and looked at Julie and found that Julie was looking at her. , , , , Now Julie saw Dyuti's face in the moonlight. , , , ,

Dhyuti pacifies Julie,;- No Julie, nothing like that,,,,, It's just was,,,,, then dyuti immediately turned her face,,,,

Julie turned back to Dyuti's face and said while looking into her eyes,;- When you do not know how to lie then why do you make such useless efforts,,,, Dyuti's eyes became moist and she He quickly hugged Julie,,,,, The tears that he had stopped for so long,,, started flowing,,,,, Julie's eyes also became moist, she started caressing Dyuti's head. .. Then there was a shrill sound in both of their ears,;- Hey Karamjali, where did she die,,,, Who will give food,,,,,, Hearing which Julie got very angry,,,,, But Dyuti immediately separated from Julie. She wiped her tears and quickly went down the border,,,, and quickly left from there asking Julie to meet her later. She started descending the stairs quickly,,,, due to which she stumbled in the middle,,,, she managed herself but her hand touched some sharp object,,,,, but she did not pay attention to it and soon she It has increased.Julie just kept watching Dyuti going, She said in her heart,;- till when,,,,,, how long will she keep hiding her tears like this,No .....

Julie went back down with weary steps.

As soon as Dhyuti reached down,,,, her aunt showered on her,,, Dyuti did not even say a word, just bowed her head down,... scolding and abusing her aunt

She didn't say anything, just quietly moved towards the kitchen,,,, and quickly put the food on the dining table,,,, (Though Dyuti's hand was having a lot of pain, suddenly suddenly she felt severe pain.  Was,,, but she didn't pay much attention,,,) Then immediately Dyuti started serving food to her uncle and aunt,,,, While serving, a little bit of food fell on her aunt's clothes,,, which caused her aunt's anger.  climbed....Aunt bursting with anger,;- this girl does not do one thing properly, A little scream came out,,,,, Aunt ignored her badly. And started serving all the food herself. , , ,Dyuti slowly;- Aunt,,,,,, Dyuti could not say anything further because her aunt's staring eyes fell on her.

Staring at Aunt Dyuti, Take this wretched face of yours and get out of here right now. , , , ,

She quietly went towards her room.