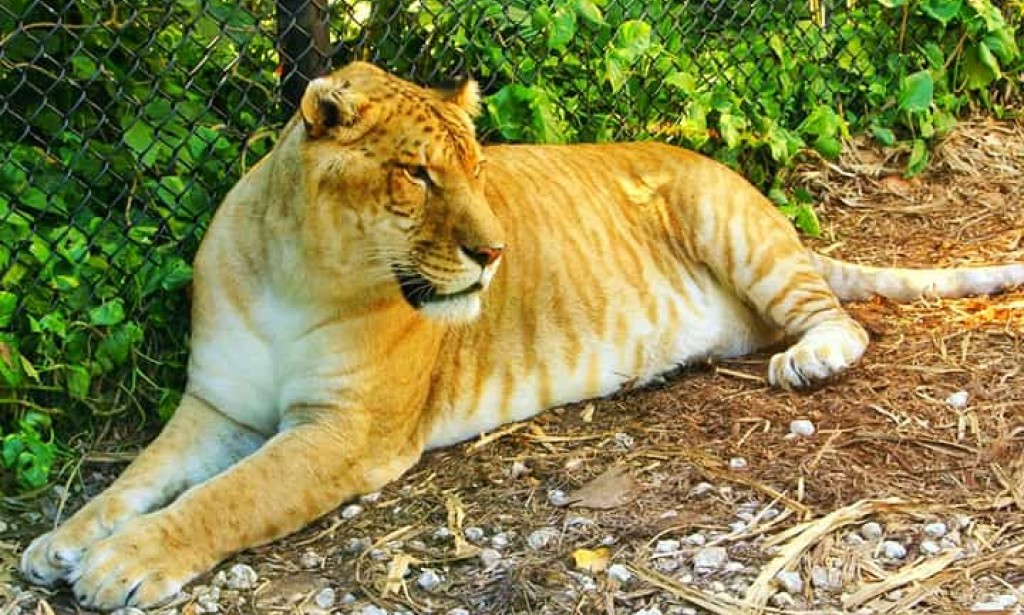 Liger The Crossbreed of Tiger 🐯 and Lion 🦁

Liger the crossbreed of Lion and Tiger

Ligers are the crossbreed of Lion and Tiger.

Ligers are born when male lions and female tigers cross-breed so they have some characteristics from both animals. Ligers have a faintly striped body (like a tiger) along with the tawny, golden background of a lion. They may also inherit brown or black rosettes (like a lion has). Unlike the lion, ligers love to swim, a trait inherited from their mother (the tiger). For many, ligers are considered as an animal who won the genetic lottery as it has the best of both its parent animals' attributes!

The liger is a hybrid offspring of a male lion (Panthera leo) and a female tiger (Panthera tigris). The liger has parents in the same genus but of different species. The liger is distinct from the similar hybrid called the tigon, and is the largest of all known extantfelines. They enjoy swimming, which is a characteristic of tigers, and are very sociable like lions. Notably, ligers typically grow larger than either parent species, unlike tigons.

Ligers are a cross between specifically a male lion and a female tiger. They are a man-made animal and not considered a real species because they would not occur naturally in the wild. Lions are from Africa and tigers are from Asia so there is no reason for their breeding other than human entertainment. Since the males are always sterile (cannot reproduce), this also means that they are not a true species of animals.

Ligers, made popular by the 2004 cult classic Napoleon Dynamite, are gold mines because of their size. The faintly striped creatures grow to about five feet tall and can weigh up to a thousand pounds, more than twice the size of their lion fathers and tiger mothers.

Such outrageous nutritional needs make caring for a liger an expense that few facilities can afford when their resources should be focused on conservation; in fact, AZA accredited zoos—which breed animals in accordance with the Species Survival Plan designed to promote the conservation of specific species and subspecies—do not promote the breeding of ligers at all, as they are an unnatural phenomenon found only in captivity and hold no conservation value. Nevertheless, the imposing size and exotic allure of the liger makes them a real crowd-pleaser, an animal oddity fit for Ripley’s Believe-It-Or-Not that attracts hundreds of visitors—and dollars—to liger-holding facilities each year, resulting in the continued breeding of the cats at supposedly reputable menageries and wildlife parks across the country. The problem with this—besides having no conservation purpose—is that ligers, as hybrids, are subject to a host of biological and social issues.

Despite being such large animals, a liger is really fast. It can run up to 50 mph (80 kmph). It is said that it can run even faster than a lion and, having such a large body, it can make its prey unconscious when it hits them. This deadly combination of speed and power is one of the many reasons that ligers would be a really scary and great predator.

Ligers are not always safe to be around.

This is an open-access article distributed under the terms of the Creative Commons Attribution License (CC BY). The use, distribution or reproduction in other forums is permitted, provided the original author(s) and the copyright owner(s) are credited and that the original publication in this journal is cited, in accordance with accepted academic practice. No use, distribution or reproduction is permitted which does not comply with these terms.

Sometimes hybrids can be bad for the parental species and for the natural world. If hybrids are very successful, there may be so many hybrids that they compete with their parent species for food and living space, which could lead to the extinction of the parent species. Losing a species is bad for biodiversity and can affect other species in that habitat. When this species loss occurs naturally, scientists do not try to stop it, because it is a natural process. Loss of a parent species due to hybrid offspring is only problematic when the hybrid is created by humans and introduced to an area where the parent species were not naturally found. We must act to prevent the extinction of the parent species in these cases. But do not worry, the hybrids that we buy at the grocery store are unlikely to cause severe environmental harm, because there are rules in place to make sure they are grown with great care.