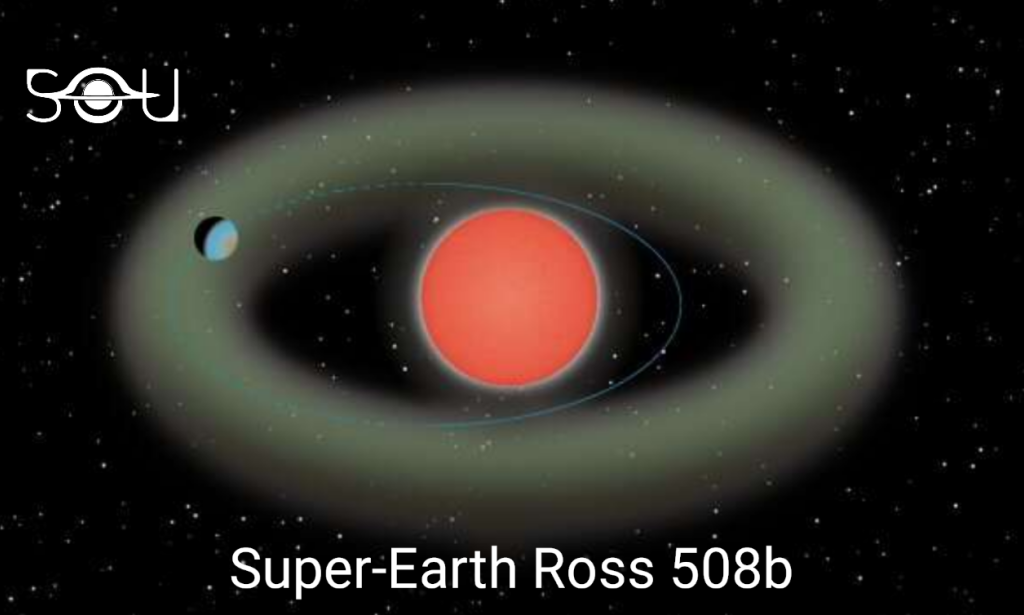 The first exoplanet has been discovered by Subaru Strategic Program using the infrared spectrograph IRD on the Subaru Telescope (IRD-SSP). This planet, Ross 508b, is a super-Earth with about four times the mass of the Earth and is located near the habitable zone. Such a planet…

as Proxima Centauri b. In particular, red dwarfs with surface temperatures below 3,000 degrees (late-type red dwarfs) have not been systematically searched for planets. The transit method, which detects changes in stellar brightness as a planet crosses in front of a star, does not require as many photons as the spectroscopic Doppler method, so the search for planets around red dwarfs using the transit method has been progressing in recent years. Transit planet searches with TESS (Transiting Exoplanet Survey Satellite) can detect terrestrial planets around relatively heavy red dwarfs (early-type red dwarfs).

The Astrobiology Center in Japan has successfully developed IRD (InfraRed Doppler instrument), the world's first high-precision infrared spectrograph for 8-meter class telescopes. IRD mounted on the Subaru Telescope can detect minute wobbles in the velocity of a star, about the speed of a person walking.

The transit method can only detect planets whose orbits are along the line of sight, whereas the Doppler method can detect planets regardless of their orientation with respect to the celestial plane. It is also an important method in that it can determine the "mass" of a planet.

The IRD Subaru Strategic Program (IRD-SSP) to search for planets around late-type red dwarfs started in 2019. This is the first systematic planet

The IRD Subaru Strategic Program (IRD-SSP) to search for planets around late-type red dwarfs started in 2019. This is the first systematic planet search around late-type red dwarfs and is an international project involving about 100 domestic and international researchers. During the first two years, screening observations were conducted to find "stable" red dwarfs with low noise, where even small planets can be detected. Red dwarfs have high surface activity, such as flares, and this surface activity can cause changes in the line-of-sight velocity of the star even if no planets exist. Therefore, only stable red dwarfs with low surface activity are targets in the search for small Earth-like planets.

Currently, the project is in the phase of intensive observation of about 50 promising late-type red dwarfs that were carefully selected through the screening.

To confirm that the periodic wobble of Ross 508 is indeed due to a planet, the IRD-SSP team identified several indicators of stellar activity that could produce a false-positive of a planet (e.g., changes in the stellar brightness and shape of some emission lines) and showed that the period of these indicators is distinctly different from the observed planetary period. This is a more difficult task than using the Doppler method to confirm planetary candidates reported earlier by the transit method, but it is an essential method for detecting non-transiting planets.

This planet, Ross 508b, has a minimum mass of only about four times that of the Earth. Its average distance from its central star is 0.05 times the Earth-sun distance, and it is located at the inner edge of the habitable zone. Interestingly, the planet is likely to have an elliptical orbit, in which case it would cross into the habitable zone with an orbital period of about 11 days (Figures 1 and 2).

Planets in the habitable zone could retain water on their surfaces and may harbor life. Ross 508b will be an important target for future observations to verify the possibility of habitability on planets around red dwarfs. Spectroscopic observations of molecules and atoms in the planetary atmosphere are also important, while the current telescopes cannot directly image the planet due to its closeness to the central star. In the future, it will be one of the targets of life searches by 30-meter class telescopes.

Until now, only three planets have been known to orbit such very low-mass stars, including Proxima Centauri b. The IRD-SSP is expected to continue discovering new planets.

"Ross 508b is the first successful detection of a super-Earth using only near-infrared spectroscopy. Prior to this, in the detection of low-mass planets such as super-Earths, near-infrared observations alone were not accurate enough, and verification by high-precision line-of-sight velocity measurements in visible light was necessary. This study shows that IRD-SSP alone is capable of detecting planets, and clearly demonstrates the advantage of IRD-SSP in its ability to search with a high precision even for late-type red dwarfs that are too faint to be observed with visible light," says Dr. Hiroki Harakawa (NAOJ Subaru Telescope), the lead author of the discovery paper.

"It has been 14 years since the start of IRD's development. We have continued our development and research with the hope of finding a planet exactly like Ross 508b. This discovery was made possible by the high instrumental performance of IRD, the large aperture of the Subaru Telescope, and the strategic framework of observations that enabled intensive and frequent data acquisition. We are committed to making new discoveries." says Professor Bun'ei Sato (Tokyo Institute of Technology), the principal investigator of IRD-SSP.

These results appeared as Harakawa et al. "A Super-Earth Orbiting Near the Inner Edge of the Habitable Zone around the M4.5-dwarf Ross 508"